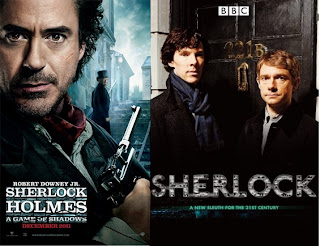 The BBC updated version of Sherlock is coming back for a second season (yay!) and we are getting a sequel for the Rober Downey Jr/Jude Law Sherlock Holmes movie (yay!).

You may or may not have noticed that I have been more absent from cyberspace than usual. I haven't been maintaining my online presence very much recently- not so much because I haven't had time, but more because I haven't made time. Its true that I am working more and longer days than normal again at the moment and it is true that I have been settling in to a new place and a new housemate, but that hasn't stopped me from doing more arts and crafts than I usually manage to fit into my weeks (partly that is probably due to the fact that my art and craft supplies are so much easier to access in my new place because they just sitting in boxes against my bedroom wall rather than hidden away in a cupboard. Mostly this is because I don't have a cupboard in which to hide them.).

I have been settling in to the new house well. I now know where a good percentage of my stuff is and I have explored the contents of all my kitchen cupboards (but I don't have a slotted serving spoon anymore. I'm sure I used to have a slotted serving spoon). I have spent exactly no time in my new garden which may be a problem because there is so much of it and I am going to have to stay on top of it a little, but to be fair most of the time when I am home it has been either dark or raining or both.

Tiani and I are getting on well. We haven't got any sort of schedule for whose turn it is to do what chores or who gets to have the first shower, but we haven't run into any problems yet (except the one time I was nearly late for work because neither Tiani nor I planned on being the first person in the shower). I've got Tiani hooked on How I Met Your Mother which she has watched a lot of over the last few days as she has been in bed sick. Consequently, we both now say "Legend- what for it- dary! Legendary!" a little too often. That's the other reason I haven't been online much recently - Tiani has had Bernard the Laptop in bed with her for the last few days watching stuff. Frequently she has also had me in bed with her watching stuff in between getting home from work and cooking tea. We watched Tangled and Gnomeo and Juliet the other night. I love kid's movies. Speaking of which, I can't wait to see the new Winnie the Pooh.

Anyway, thats about it for now. I've got both tomorrow and the next day off work which is an absolute luxury - its annoyingly rare to have two days off consecutively. I plan to go home tomorrow and soak up some family time, but after that I'm not quite sure what I'll do with it. There's something kinda wonderful about having time off and no definite plans for it :)