Guess what! I have a job interview! Monday the 5th at 1pm.
Very exciting!!!

Update: 5 mins after the phone call for the interview I got my honours results!!! I didnt fail! Yay!!!
Whoop Whoop *dancing around the room*

Ah, somedays life is brutal and heartless and then you get a day like today and you feel like walking on the moon and dancing among the stars :)
Posted by Emma 1 comment:

After all the chaos of honours and then most of my friends having quite a lot of chaos of their own with exams and things, I haven't really had a lot of time with my friends lately. Thankfully, that's finally beginning to change. Finally, over the last few days I've gotten to spend some time with some of my favourite people.

Anyway, I was planning to tell about a couple of things in particular. While spending time with my friends I have recently been to see 'Black Coffee' and 'Shrek: Happily Ever After'.

I don't usually enjoy black coffee, but I did enjoy 'Black Coffee' - its a Poirot mystery written by Agatha Christie performed by the Hobart Rep Theatre Society. It was a lot of fun. The set was good, the casting was good, the acting was decent. Unfortunately it was too easy to solve the mystery, but it was still very enjoyable. I especially thought both Poirot and Hastings were well cast and well acted. Hastings was gorgeous- so funny!

Then yesterday I went to see Shrek 4 in 3D. I really only went because I was desperate to see something in 3D. If I had been a little more patient I could have just waited till next week and gone to see Toy Story in 3D instead. That probably would have been a better idea. I think I would have been rewarded for my patience. It wasn't that Shrek was especially bad, it just wasn't especially good either. Not really surprising since the Shrek series has been on a decline with each new movie. But the 3D was fun. Really fun. And I got to hang out with my friends. Maybe we'll go to see Toy Story in 3D as well.
Posted by Emma 3 comments:

Well, the tattoo being performed on my roof has finally ended and the scaffolding outside my window has been taken down (see previous post) so I will return to the planned post for today. Since I have now had several requests for photos of my venetian mask craft project your wish is my command.

Before you get to see the photo, though, I'm going to have to write some more boring words for you to read to explain a little bit about it all. I decided back when Rob and I were in Venice last year that I would like to attempt to make a traditional mask. Well not entirely traditional. Of course, the first Venetian masks were fairly simple, usually made out of molded leather, and designed to be worn, but I wanted to make a "traditional" decorative mask instead. The decorative masks are usually either ceramic or paper mache, usually full face rather than the half face designs that are common in masks designed to be worn, and usually include a jester's hat. While we saw hundreds, or perhaps even thousands, of masks while we were in Venice we didn't take many photos of them. I'm not sure why we didn't - probably a combination of the fact that the guys selling the masks were a little bit scary most of the time and the fact that we were too busy taking photos of the Venetian glass instead. Anyway, the only photo we seem to have is this one: 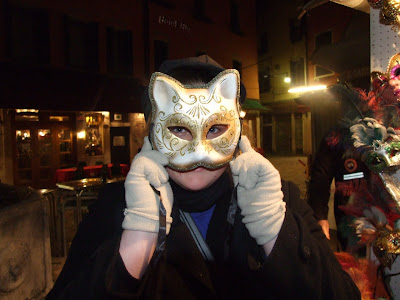 That meant that when I was designing my mask I did so partly from memory of the one's I'd seen and partly from the results of a google image search. Then it was off to Spotlight to figure out how I was going to do it. I bought a flimsy plastic mask mold to start with and decided to reinforce it with paper mache. Several layers later, I got to start painting and decorating and the fun began. The jester's hat was the most challenging part because I haven't done anything like that before but it was fun and I got to make rather a lot of mess with glue and scraps of material everywhere. Anyway, this is the finished project on my wall. 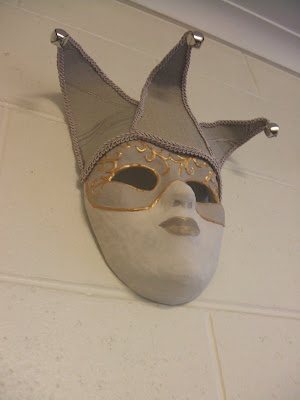 what a crazy random happenstance...

I was awoken today at the unpleasantly early hour of 7:30am by the sound of someone's boots stomping on the roof directly over my head. Rather a strange sound to wake up to. It took me a couple of moments to figure out what was going on. Apparently today is the day that the gutters around my apartment block get replaced. It would have been nice to get some warning. It would have been nice if they hadn't started quite so early in the morning. But perhaps they needed to start this early to make the most of the rather stingy amount of sunlight available these days. They are still stomping around up there now almost 6 hours later and a rather large pile of discarded guttering is appearing on my lawn. I hope they finish soon - its rather a headaching noise they are making up there.

Anyway, that wasn't the news that I was planning to share with you, but as I haven't yet had a chance to complain to anyone else about it yet you will have to do. I will get around to the other blogging duties later.

Ciao
Posted by Emma No comments:

I thought some of you might be wondering what I am up to at the moment. The answer is not much actually. At least not much of interest. Whenever anyone asks me I reply, "looking for work" - which is, of course, the truth, but it doesnt actually take up all that much of my time to browse the employment websites. So in my spare time I have been finishing off a couple of little craft projects (I finished the Venetian mask. Does anyone want me to stick up photos?) and reading and stuff. I have also been spending several days in bed sick, but that's not much fun.

I have only applied for two jobs so far and as both of these applications were very recent I wouldn't expect any exciting news yet. As soon as I have any news you will all know immediately as I expect I will be too excited to keep it to myself even if I wanted to.

In the meantime, I'll keep occupying my spare time with working on some of the many unfinished projects I've got on the go. I'm also planning to have a bit of a spring clean of my apartment and get rid of some of the unnecessary accumulation of clutter that has somehow filled my cupboards over the last few years living here. This should be very useful if it turns out that I get a job in another part of the state and have to move, but wont exactly be a bad thing if I stay here either. I'm afraid my genetics makes me quite prone to accumulating clutter and its good for me to have to wage war against it all occasionally.