Happy New Year!
Farewell to the Noughties (stupid name for a decade anyhow). 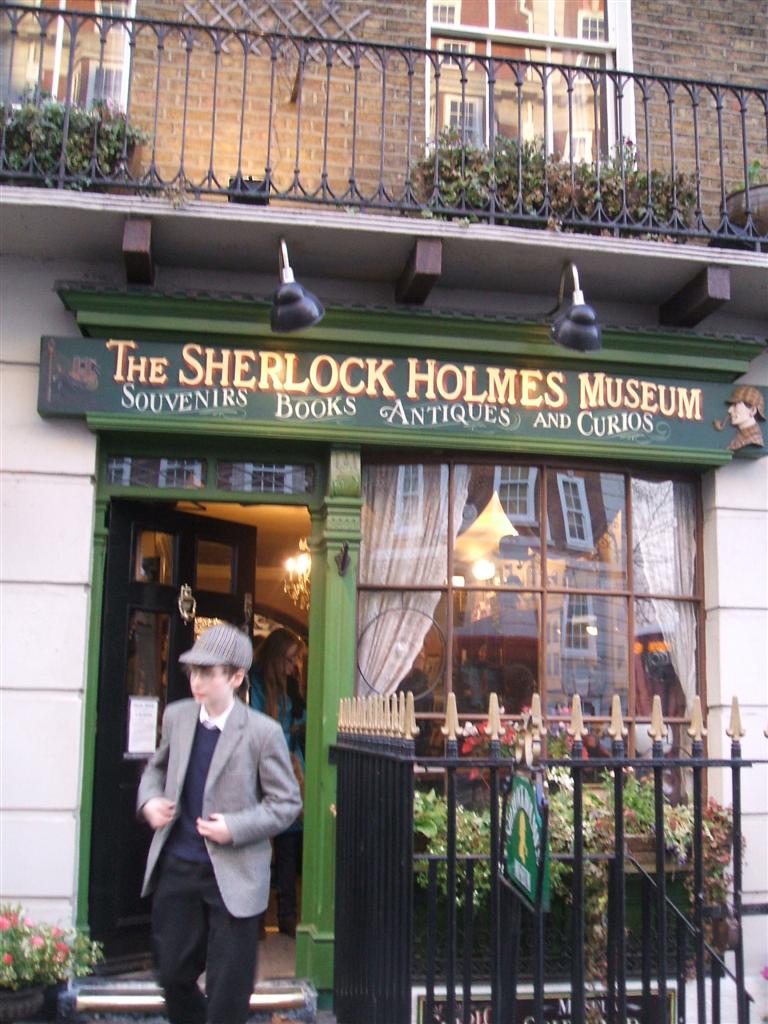 Photo taken at 221b Baker St whilst in London

Lately, I have been very much infatuated with Sherlock Holmes, the famous creation of Sir Arthur Conan Doyle (as my family is all very well aware of). I have always liked the Sherlock Holmes stories and read a good deal of them in my mid teens. I quite like the fact that you can never quite solve a Sherlock Holmes mystery because Sir Arthur always wrote from the point of view of Sherlock's faithful companion, Dr Watson, and Dr Watson was only of just above average intelligence and never noticed the pivotal clues. This always gave Sherlock the opportunity of remarking, "Elementary, my dear Watson" and explaining the mystery with the inclusion of the clues that Watson had not noticed. Although Sherlock, as I said, often had the opportunity to say this, he never actually said it (much like, "Beam me up, Scotty" was apparently never said in Star Trek).

My interest in Sherlock was reawakened when my Aunt Bec came to Tassie for a visit a few months ago. Bec stopped at a second hand shop to buy a book to read while she was holidaying down here on the island. She didn't much care what book it was so she picked up one called "The Beekeepers Apprentice" by Laurie R King. She thoroughly enjoyed the book and left it for me to read and send back up to her (notice she liked it so much that she wanted it back). I read the book and loved it and went on eBay to buy my own copy. "The Beekeepers Apprentice" is the first in a series of books (of which I have now collected four, unfortunately not 1,2,3,and 4 but 1,2, 4,and 6 so I've only read 1 and 2) in which Holmes, after retiring to the country and raising bees, meets a young woman with a gift for detective work almost equal to his own. The two then of course have adventures and solve cases together.

After patiently listening to me bubble on about how wonderful these new Sherlock Holmes adventures were my very thoughtful brother gave me a very large amount of audio books on Cd for Christmas to listen to while I am travelling up and down the coast all summer (I often like to listen to audio books as they hold my concentration better than music and keep me awake). Amongst these are many of the original Sir Arthur Conan Doyle masterpieces and I have already listened to "A Study in Scarlet" and "The Sign of the Four" whilst travelling around the state in the last week.

Then, as I'm sure you are all aware, the new Sherlock Holmes movie just came out and, of course, I wanted to see it so Mum, Dad, Rob, and I all went through to Devonport to see it on Monday. I actually really liked it. I have some issues with it such as the casting of Robert Downey Jnr as Sherlock (Sherlock is described as being very tall and lean with sharp eagle like features - I think Hugh Laurie should play him personally), the fact that Dr Watson was much smarter and more useful than portrayed by Sir Arthur, and the fact that Dr Watson's fiancee was completely different - the same name, but a completely different person to the one in the originals. Despite of all these flaws, I really liked it. The case was one in which no logical solution seemed possible until Sherlock himself explained it to you - exactly the way Sir Arthur always intended it to be. The music by Hans Zimmer (the guy that did Pirates of the Caribbean and a heap of other movies with awesome scores) was very good and really added to the movie. Despite my objections to the casting, Robert Downey Jnr did a reasonable job, and despite his being far too useful, so did Jude Law in his role of Dr Watson. Even Rachel McAdams (not one of my favourite actresses) didn't manage to murder the role of Irene Adler too badly. The villain of the story, Lord Blackwood, was brilliant. Just look at him - isn't he simply dripping with evil? All in all, its been a very Sherlock-y summer so far. And that's just fine with me :)
Posted by Emma 2 comments:

There is quite a bit I should be blogging about at the moment - at least 4 posts worth. They have all been building up because of the ridiculous amount of time I have been spending on the road and up the bush lately. When I am actually spending time at home I manage to expend what little energy I have left on boring things like unpacking all my dirty clothes, doing the washing, and repacking. Then all I have the energy to post is pictures of sharks I fell over. Eventually, I will get around to writing all the posts, but for now you'll just have to content yourself with this one about Christmas.

Technically I am currently on holidays, but I have only had one day (Boxing day) of not doing much. It was really nice to just spend the day playing Zoo Tycoon, but I regretted it afterwards. Well, actually it was spending the entire day staring at a computer screen without my glasses that I regretted. Completely messed me up for the next couple of days. I have a little more interesting eyesight problem than the rest of my family - I have difficulty focusing rather than simple short-sightedness or far-sightedness - so forcing my eyes to focus for an entire day without having the good sense to put on my glasses resulted in having difficulty focusing on anything the next couple of days and in me feeling car sick when I was no where near a car. Anyway, enough grizzling about that - I'm supposed to be telling you about Christmas. I cant really be bothered, though, so I'm going to do it in pictures instead. 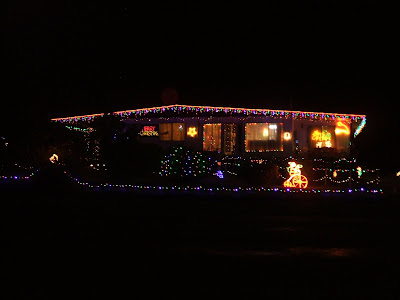 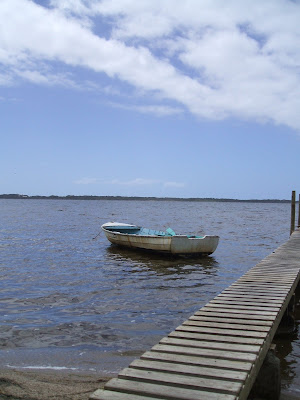 Christmas Day - after breakfast and presents we headed up to Anson's Bay (that's where Grandma and Pete live) to have the traditional big family gathering that is now much smaller because most of the family has run away to the mainland. Turns out we got there a couple of hours before anyone else (we could have slept in) so I filled in some of the time on the jetty watching the shorebirds (how unusual for me) and when that got boring wandered around taking some arty-farty photos of anything I found interesting. 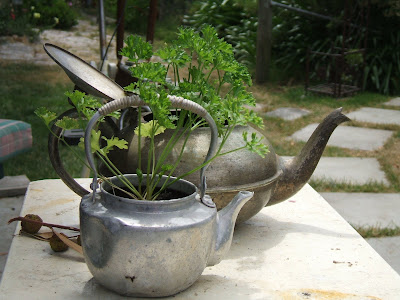 Eventually, everyone else turned up and we had the traditional Christmas fare (turkey & ham & veggies of assorted varieties) plus the five (I think it was five, may have been six) crayfish that Pete had caught for the occasion. We ate outside under a rather awesome umbrella (ella ella - ha ha, do you want to kill me for getting that stuck in your head now?) 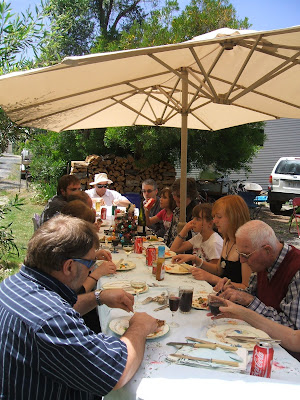 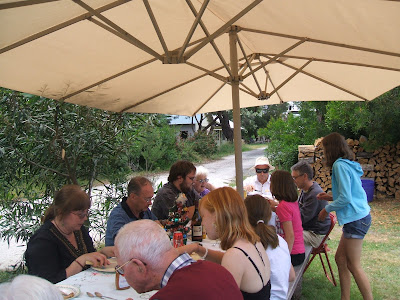 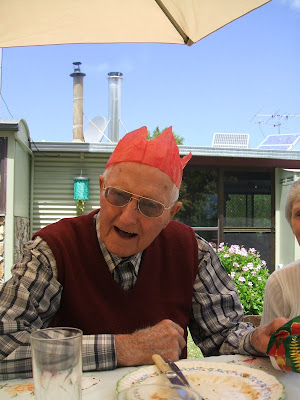 This is my 95 year old Great Grandfather, Fred. He had a lovely time, and even had four desserts (raspberries & cream, plum pudding, tiramisu, and pavlova).

Eventually, Dad woke up from his post lunch nap and we went home. You've already heard about Boxing Day, Sunday was pretty normal, Monday I'll tell you more about in a future (but hopefully near future) post.

I suppose you might like to know what I got for Christmas. I'm not going to bother typing out everything I got and boring you to death with all the things that I find interesting and you wont so I'll just leave you with a couple of highlights.
There you are, my obligatory Christmas post is over. Merry Christmas!
Posted by Emma 5 comments:

something a little unexpected...

When I am doing fieldwork I often have the problem that because I am so busy looking into the distance at the bird I am observing I dont always pay enough attention to what my feet are doing. This has resulted in wet shoes several times now and once in slipping over on a washed up jellyfish (washed up jellyfish are extremely slippery). I have learnt to make full use of my peripheral vision and now everytime I see something out of the corner (or the bottom really) of my eye I look down to check what I am about to walk into. I saw something out of the corner (or bottom really) of my eye only the other day and when I looked down it gave me quite a start. This is what I saw. 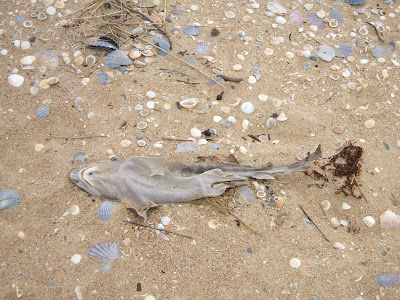 Something weird is going on....

Something funny has happened and the blog has gotten a little confused so my most recent post "Return to the Hundred Acre Wood" actually appears after my second most recent post "Say hello to my little friend" so just scroll down a little bit, have another look at the gorgeous cutiepies on your way past and you'll find my latest offering. Well, actually this is now my latest post, but you know what I mean.
Posted by Emma 1 comment: