This weekend was the Kingston clan's big family Christmas do, which meant a trip down to Taranna. We all left here on Friday night with a car full of Christmas cooking and arrived at Grandma and Grandpa's a little before midnight. As the Christmas do wasnt until Sunday we were left to fill in Saturday however we wanted. However, in our case Saturday had been planned for as long as Sunday because Dad promised me we would go snorkelling around Shelly Beach. I love snorkelling! Mum stayed on the sand because it wasn't warm enough for her to get in the water, but Rob, Dad, and I all went. The rocky reefs around Shelly are great for snorkeling and are home to a lot of marine life - I saw 5 different species of fish, mussels, limpets, sea snails, a sea spider, anemones, and lots and lots of seaweed. We snorkeled for over an hour - pretty good for Tasmanian temperatures.

Then on Sunday, we went to the morning church service and then up to Charlie and Sabines for the bbq and gift swap. Only 2 of my cousins were missing from the family, so it was a pretty good gathering of the clan. Sabine and Charlie have just put in a rather massive above ground pool and a few of the boys were brave enough to get in and have a swim in their undies despite the cool day. Actually, I'm not sure if Rowan was brave or just still drunk from the night before. His performance as the Christmas elf (including a costume designed for an eight year old) would suggest the later. Unfortunately, I dont have any photos of any of this. In fact, I dont have photos of anything. I am thoroughly dissappointed with myself. I am going to have to get my hands on some of the ones taken of Rowan in his elf costume, and the one of me and Dion with our broken arms (which we broke on the same day and both of us broke our left arm).

Anyway, it was a great weekend and I had a lot of fun. But as I promised that this post would be both interesting and contain pictures I will add this: 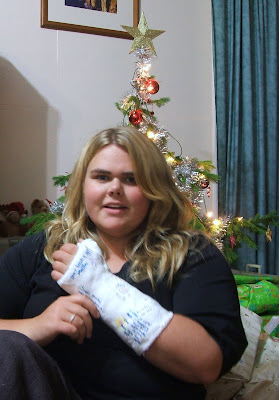 The arm all wrapped up under the Christmas tree.
Posted by Emma 1 comment:

So, on Wednesday I went back for a second set of xrays and I got to get rid of my cast :) The fracture, which was only minor to begin with, has healed well and now I finally have my arm back. Its still a bit sore and weak and I have to be very careful with it, but thats better than another 4 weeks in the cast.

Just thought you should know, but I promise the next post will be more interesting and have pictures.
Posted by Emma 3 comments:

The incident of the homicidal gates...

Alright, I have been convinced not to stop writing in my blog just yet. So now I have to attempt to explain what happened at work on Saturday that has resulted in me wearing a massive, white plaster cast on my left arm. Its a complicated story so it might be a bit difficult to explain. Typing one handed isnt going to help either.

So, on Saturday morning I was working with my mate, Jason, and we were planning to go down to Bunnings to buy some supplies to build steps so my shorter collegues will be able to see over the fence into the devil enclosures. At headquaters in Launnie there are two sets of massive wrought iron gates that look something like this: These aren't the actual gates - just a google image search for something similar. Anyway, so Jas and I hooked the trailer up to the ute and set off for Bunnings. Jas was driving so when we got to the main gate I jumped out to open them (they are locked on weekends). I pulled one gate open and put the peg down and then pulled the other gate open and held it. This is where the explaination gets complicated. As Jas drove through, the far gate (the one I wasn't holding) started to swing back, but at that point I knew there was nothing I could do and thought that it would just bounce off the trailer. I thought wrong. As the gate hit the trailer it must have gotten caught just in front of the mudgaurds, which made the trailer jump dramatically and unexpectedly off the road and into the gate which I was holding at great enough force and speed to send me flying onto the footpath. I had enough time while I was in the air to think "I'm going to die... No, but its going to hurt" and then I landed. It was at this point that Jason, having heard and felt the collision, but having no idea what had happened, saw me lying on the ground and thought he'd killed me. Because I'd been holding the gate in my left hand, I was forced sideways rather than straight back when I fell, so I landed on my right side, meaning that instead of breaking my tailbone and jarring my spine and hitting my head on the concrete post that I narrowly missed, I just got bruises and scrapes all down my right side. Poor Jason then came flying around the trailer asking me if I'd hit my head. My initial answer of "I dont know" didn't seem to give him much confidence. I then decided that i hadn't, but he didn't seem sure wether or not he should believe me. My biggest concern was my right wrist which was badly bruised and quite sore so Jas got me an icepack. It wasn't until later that I realised that my left wrist was starting to hurt more than my right one, but by that point I had convinced Jas that I was ok and we were at Bunnings.

I thought I was just bruised and had probably sprained my thumb/wrist when the gate was wrenched out of my hand so I didn't see the need to go to the dr, but my boss insisted that I should go just in case. When I went that afternoon, the dr thought I may have actually broken my scaphoid bone in my wrist and gave me an xray refferal for Monday. But on Sunday morning after a painfull and relatively sleepless night, Mum decided that we weren't waiting and she took me into A&E. The dr there also decided I may have broken my scaphoid and sent me for xrays. Apparently, it is often very hard to tell if the scaphoid is broken in an xray, but they decided it probably was and I was given a plaster cast, some pain killers, and two weeks off work.

So, in 10 days, I get to go back for another xray and then they decide if the cast needs to stay on for the remainder of the 6 weeks, or if it really was just a bad sprain after all. And in the meantime I have to workout how to do everything one handed, but unfortunately driving Barry is out of the question completely and my cast isn't waterproof so I can't go snorkelling until it comes off either. So I'm hoping that the cast comes off sooner rather than later or its going to be quite a boring summer.

Not my xray - just a google image search. my xray is still at the hospital, but I thought the anatomically ignorant among you might like to know where the scaphoid is.