For Christmas, my parents gave me a trail camera. Its a motion sensor camera for tracking wildlife - it takes both stills and video and has infared night vision. The other day, I put it in the enclosure with the little devilies I raised to try it out. I was please with the fact that it was as easy to use as the ones we have at work, and was about the same quality.

The stills, as can be expected, were much less interesting than the video, but here's a still taken just after dark to give you an idea of the night vision capabilities. 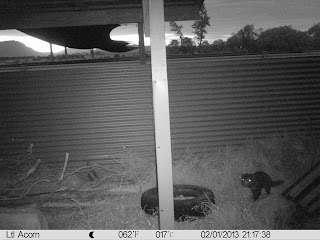 No vids, so photos instead

Currently, blogger won't show any videos I upload and seems to have lost all the videos out of previous posts as well. This is very frustrating as I was going to share a video with you, but as I can't here are a few photos of Ronan and Tayla in their grown-up enclosure out at Cressy where they have been thriving for the past month or so. At last weigh-in they were around 3kg and Ronan was actually heavier than Tayla for the first time ever, but that was weeks ago so they need weighing again. 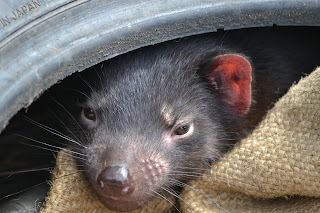 We love hanging out in our tyre - its the perfect size for us to snuggle up in. 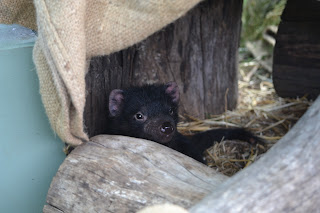 Our nest box opens into this lovely den so we feel nice and secure. Mum lifts our hessian sack curtains to check on us when we are hiding out in here. Its our favourite place on hot days as it is so nice and cool. Although, we also love hanging out under the leaves of the huge lomandra on hot days. Or playing around in our pool is always fun as well. 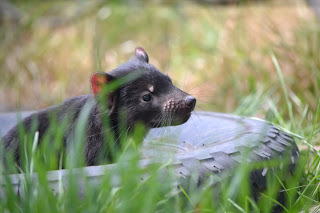 Now that we are used to it, the big, wide outside world isn't scary at all. 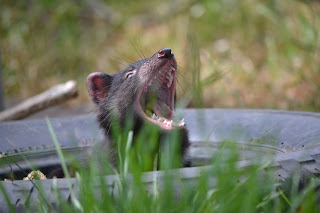 Except the hose - that's still very scary! We run and hide whenever the hose monster appears.
Posted by Emma No comments:

A soft spot for softies

Earlier this year, I made both my housemates Adipose (cutsie little aliens from Dr Who) softies for their birthdays as they both love them and said they wanted them when we were re-watching the episode of Dr Who they feature in. I hadn't made a softie for a while and found I really enjoyed so I made myself a little owl as a prototype of a pattern I was designing. 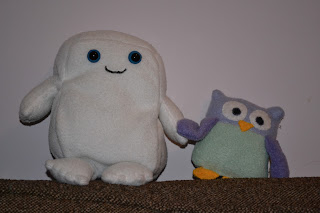 Tiani's adipose and my little owl spent a while living on the back of an armchair in our living room. Our friend, Hannah, came over one night and admired them. It was only a few weeks until her birthday so I offered to make her the soft toy of her choice. We pulled out my soft toy pattern books and Hannah decided on a bunny, but there wasn't a pattern she liked so I was set the challenge of designing a bunny softie pattern for her. Bunnies are a lot more challenging shape to simplify than owls, but I gave it a go and Mr Bunny is the result. 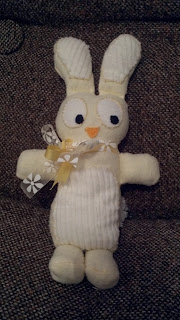 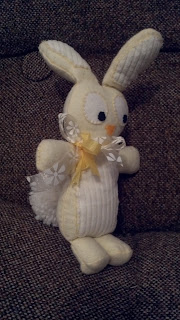 I took Mr Bunny to show my crafty workmates as I was quite proud of the way he turned out, which resulted in a commission for me to make another owl for an upcoming baby shower that my workmate was attending. I've previously made large owl softie/cushion/things for a couple of workmates who have had babies and they have been very popular so I adapted that pattern and made a bright blue one (they were having a boy). I was even paid for it, which kinda makes me a professional soft toy maker. 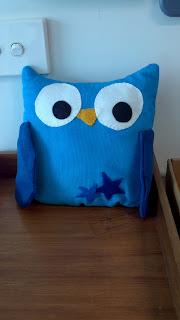 Most recently, I've made a coffee cup plushie (from the chewing gum ad with all the evil food creatures) for Christine. While watching the ad together several times she remarked that she would love a softie of the coffee cup, and when it got close to Christmas and she said it again, I knew what I would be making her for Christmas. The coffee cup plushie is the size of a large takeaway coffee and was a little challenging to design because of the complicated shape of the lid (most of which you can't even see from this angle), but turned out pretty well. 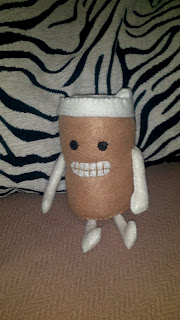 So, the moral to this story is:
Don't mention you would like a plushie, softie, or teddy of something in my vicinity unless you really mean it.