Well, I had the best of plans for this morning, but as the poem says that definitely went astray.

I had a rather important essay due in at 10:00 this morning so last night I diligently made my lunch, packed my bag for uni, got everything organized, set my alarm for 7:00, and went to bed.

My big plan was to get up at 7:00ish, get into uni by 8:30, make myself a cuppa and chain myself to a computer until the final proof reading and polishing of my essay was complete. Then I was going to leisurely check my emails and wander down to class at 10:00, handing my essay in at the office on the way. This is the same plan that I have used for many assignments over the past three years and usually works quite well.

That was the plan, now for the reality.

Well at exactly 9:59 this morning I woke up with a start.

And that's where everything went up the creek. Apart from that I still followed the plan except that the essay didn't get handed in until 11:00 and I didn't make it to class.

I don't know why my alarm didn't go off (maybe it did and I just slept through it), but I do know that I needed the sleep and it was the best, and longest sleep I have had since being on this last round of medication. Apparently being able to breathe comes at the cost of not being able to sleep.

Oh well, at least the essay is in and I don't have to worry about it anymore.
While I was handing it in I got another one back and I got a distinction for it so I'm hoping I do that well in the one I handed in this morning.
Posted by Emma 1 comment:

Ok, so I've been thinking for a while that I should do some movie reviews on my blog.
Actually, I have the thought after almost every movie I watch and today I'm finally going to do it for two movies that I have recently watched.

Firstly, The Children of the Silk Road.
This is a movie based on a true story in 1930's war torn China, and as such is not a cheerful movie.
In fact, it is quite decidedly sad in quite a few places, but it was a beautiful movie.
This is not a movie you should watch if you are in need of cheering up, but it is a movie that you should watch. I went to the State Cinema to see it with a couple of friends, but I'm sure it will be out on DVD shortly.

And secondly, August Rush.
Again this is not the sort of movie I generally watch. Normally, I'm interested in romantic comedies- you know your basic chick flicks- and some action movies, but this would fit more under the genera of drama than anything else.
I quite liked it, and I think anyone that really enjoys music (and feels it flow through them) would also really enjoy it. This movie made me desperately want to get hold of a 2nd hand guitar and teach myself how to play : )


Now if you've been paying attention you might notice that the same guy appears in both posters. His name is Jonathan Rhys-Meyers, and until just recently I have never heard of him before. He has got one of those strange faces where I can't decide if he is cute or ugly, and in one movie he has an English accent and in one an Irish accent and they both sound perfectly natural so I don't know where is actually from (probably the USA or somewhere completely different), but none of that really matters because he is quite a good actor (by that I mean that I wasn't distracted from the storyline by it, so it must have been good).

Also of interest is the fact that Robin Williams is in August Rush. Robin has been one of my favourite actors and comedians since childhood (mostly because of his role of the Genie in Aladdin), but I still very much respect his acting ability. He usually either seems to play a comedian or a psychopath (occasionally a bit of both in the same role), but this time he wasn't really either- just a little bit creepy.

Now for the bit that you have been waiting for:


In case you need a reference list to figure out how good three starts actually is here you go.

Well, there you have it- Emma Kingston, Movie Critic Extraordinaire
Posted by Emma 2 comments:

Well, the long-awaited charette happened over the weekend.

As much as I complained about the arty-fartyness of the exercises (and I still maintain that it was arty-farty) I actually think that I did gain something from it. Having to work with a group of six other people you have never met on a project you know nothing about with a deadline the next day is absolutely intense, but I think that it was actually worth it.

The scenario we were given at 5:00 Friday was that the Hong Kong Airport Consortium were proposing to extend the runway in the Hobart Airport to allow for truly international flights and were asking for tenders from interested environmental consultancies to prepare the environmental impact statement.

The main problem with the proposal is that because of the location of the airport the runway extension would have to go partway into the estuary and cut off most of the water circulation into Barilla Bay (where the oysters are grown). There are also complications with a RAMSAR listed wetland (a wetland of international significance for migratory bird species) across the estuary, several endangered plant species, the aquaculture industry, and a small endangered starfish with a population stronghold in the close proximity. All of these factors had to be researched and we had to come up with ways of mitigating the impacts on the environment (by the way, this scenario isn't actually fictitious, apparently it was proposed in the 90's, but was turned down because of the environmental problems) and prepare a presentation by 2:00 Saturday.

My team chose to be known as Doyen Environmental Consulting because it is a French word meaning "expert"or "leader in the field" ('and that's exactly what we are'- the opening line of our presentation). We had a few problems in getting the research done and compiling it into a 15min PowerPoint (and 5 minutes of question time), especially when some of the slides randomly went missing 2 minutes before the presentation was due, but we got it done.

The panel of experts (from real consulting firms and the Department) retired to reach a decision for half an hour. In the end at 5:00 Saturday, we were awarded 2nd place and a certificate for "The Most Professional Presentation," but the $200,000 contract (novelty check and 6-pack) went to EcoScope Consulting and two good friends of mine.

And then I was exhausted.

And I still am.

Well, this is not really news, but I am not very well at the moment. I wasn't feeling too good so I went to the doctor and left feeling a lot worse about an hour later because she wanted to get some spirometry readings and hooked me up to the nebuliser and put me on my very favourite (sarcastic) medications. So apart from all that very boring stuff, what else has happened?

Well, it snowed. Not at my house (that I know of), but almost everywhere else including at uni.

For "consultancy" read "team", for "contract" read "bag of lollies", and for "Clarence City Council" read "lecturers".
It was an excercise for my ridiculously 'arty' geography and environmental subject, Environmental Impact Assessment. This was only a small excercise with 15 min preparation and 5 min presentation time against 2 other "consultancies", but this weekend we have to (in the same groups) work from 5:00 to 10:00 Friday night, then start again on Saturday morning and be ready to give a 20min presentation by 2:30pm to try to win another "contract" against about 6 other "consultancies."

And if we do win, we get one of those huge novelty checks and some bottles of wine (and a good mark on our assessment for the weekend).

Its all about learning "real world practical skills," but it seems more like drama class to me. At one point Megan and I thought they were going to suggest a group hug or 'trust falls' or something equally as touchy feely, artsy fartsy. I tell you, the scientists among us are quite out of our comfort zone in this subject.

Oh well, we just have to keep reminding yourselves that it is our last semester before graduation- scary isn't it.
Posted by Emma 4 comments:

The Picnic and some other stuff

Well, its been over a week since I blogged so I thought I'd better give you all some photos to look at.

This first one is of my beautiful pussy cat, Fidget. I went home to Mum and Dad's (and Fidget's) last weekend and she was very engrossed in reading my Contiki trip itinerary for the trip to Europe that I won (I think she wants to come too, so I had to tell her that in cat years she is way over the Contiki upper age limit of 35 and in people years she is under the minimum age of 18 so she can't come- that and the fact that she hates travelling anyway). 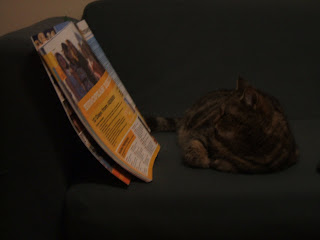 On Wednesday, for my Environmental Impact Assessment subject we had to go on a field trip (quite literally to a field beside the Hobart airport) to conduct impact assessments for a new waste water treatment plant that is currently being built. Because we had to organise our own transport Megan, Tori and I decided we would travel down earlier and have a picnic lunch at 5 mile beach (which is only a few minutes from the airport and, consequently, our field trip). 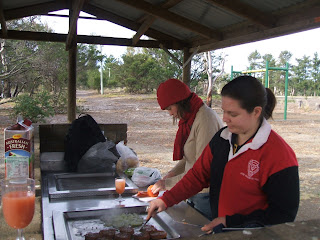 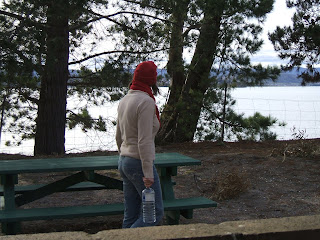 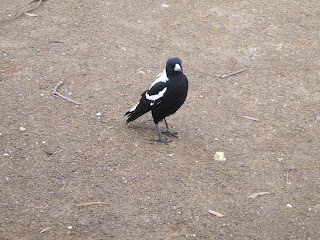 We were attacked by magpies insistent on stealing our lunch (quite literally attacked, but somehow Tori still finds them cute-I like it when they sing, but I have decided that they are not cute).

Then on the way home we passed a cast sheep (a sheep that is stuck on its back and can't get up) and had to stop, climb over one normal fence, climb through a second fence with an electric top wire, and rescue the sheep. It didn't take three of us to help the sheep, but we all went anyway because no one wanted to miss the adventure. From how stiff the sheep was when it got back up and the amount of manure piled up at its back end, I'm guessing it had been there all day so I'm glad we rescued it.

Apart from finally finishing my stupid, boring essay and handing it in on Thursday morning that is all the interesting stuff that happened to me this week.
Posted by Emma 4 comments: