After months of working in the caves, I finally managed to go on a short adventure in a "wild" cave this week. There are over 300 caves in the area around Mole Creek, but I had only been in the 2 with the convenient pathways and lighting and handrails so it was definitely about time for a bit of exploration.

My day started off at Marakoopa, watching some of my workmates start an adventure into the parts of the cave that don't have pathways. I elected not to go on this particular adventure because I'm not confident on the ropes and there were limited places on the permit, but I was still keen to watch their descent off the pathway into the river bed. This meant getting to work at 7am, but I decided to stay at the King Solomon house so I didn't have to get up too early.

Here is a video of my friend Cath going over the edge. Its sideways unfortunately, but for some reason Blogger's video player puts it sideways even though the video itself isn't. It must be an aspect ratio type thing. You'll just have to tilt your head (or your screen) to see it properly.

Then after a full day at work taking tours through Marakoopa,  I still hadn't had my fill of caving for the day so Cath, Teresa, and I went and explored my first "wild" cave. I had an amazing time. I had an even better time than I thought I was going to. The cave we explored was on the property that Cath is renting close to work and she had already explored it 3 times so she knew exactly what she was doing - she's also a very experienced caver- so Teresa and I just blindly trusted her that she knew what she was doing as she set up ropes and led us through the cave. Our trust was well placed, and Cath was an excellent trip leader. 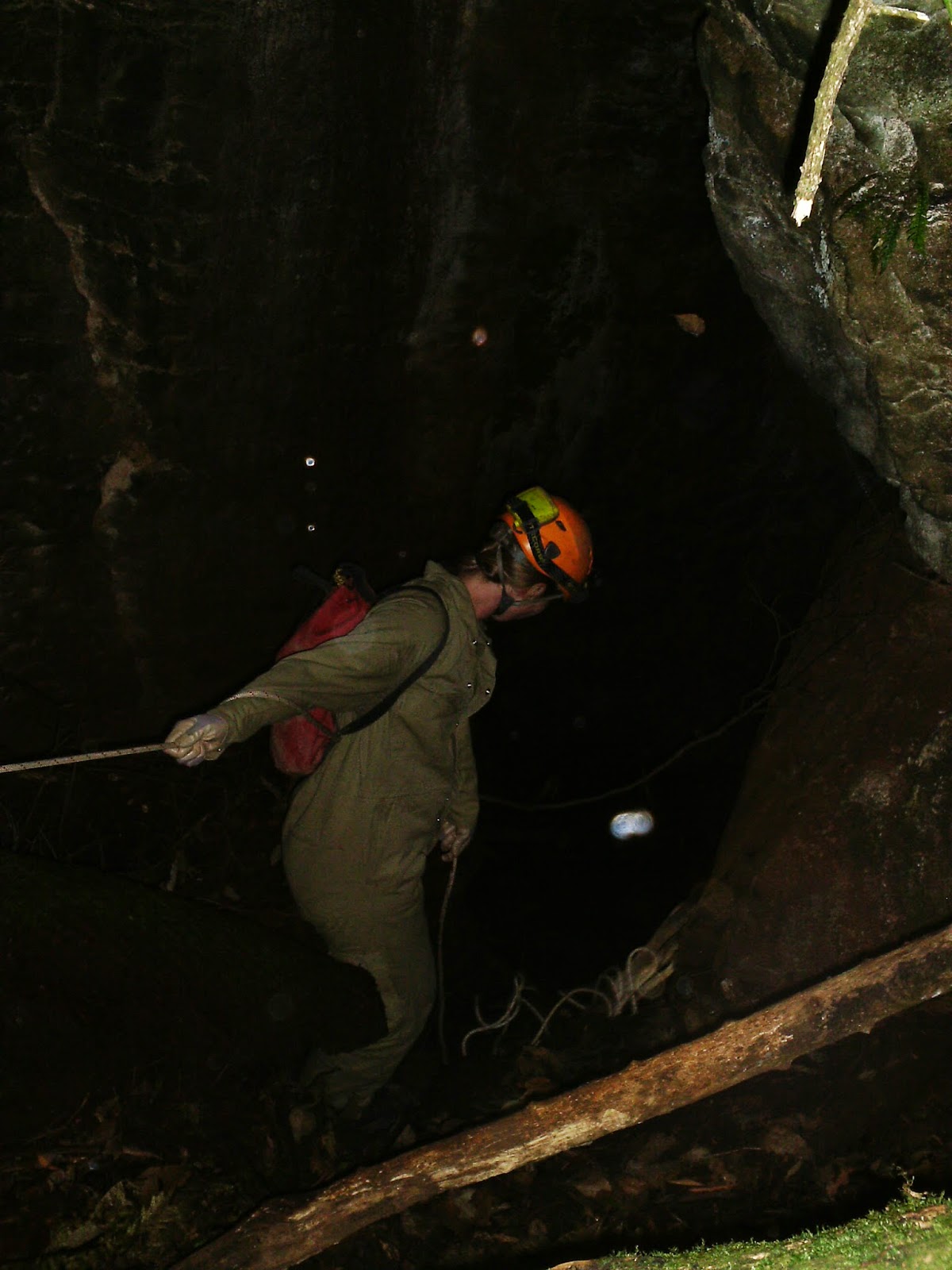 Cath going down the almost vertical descent into Quarry Cave. 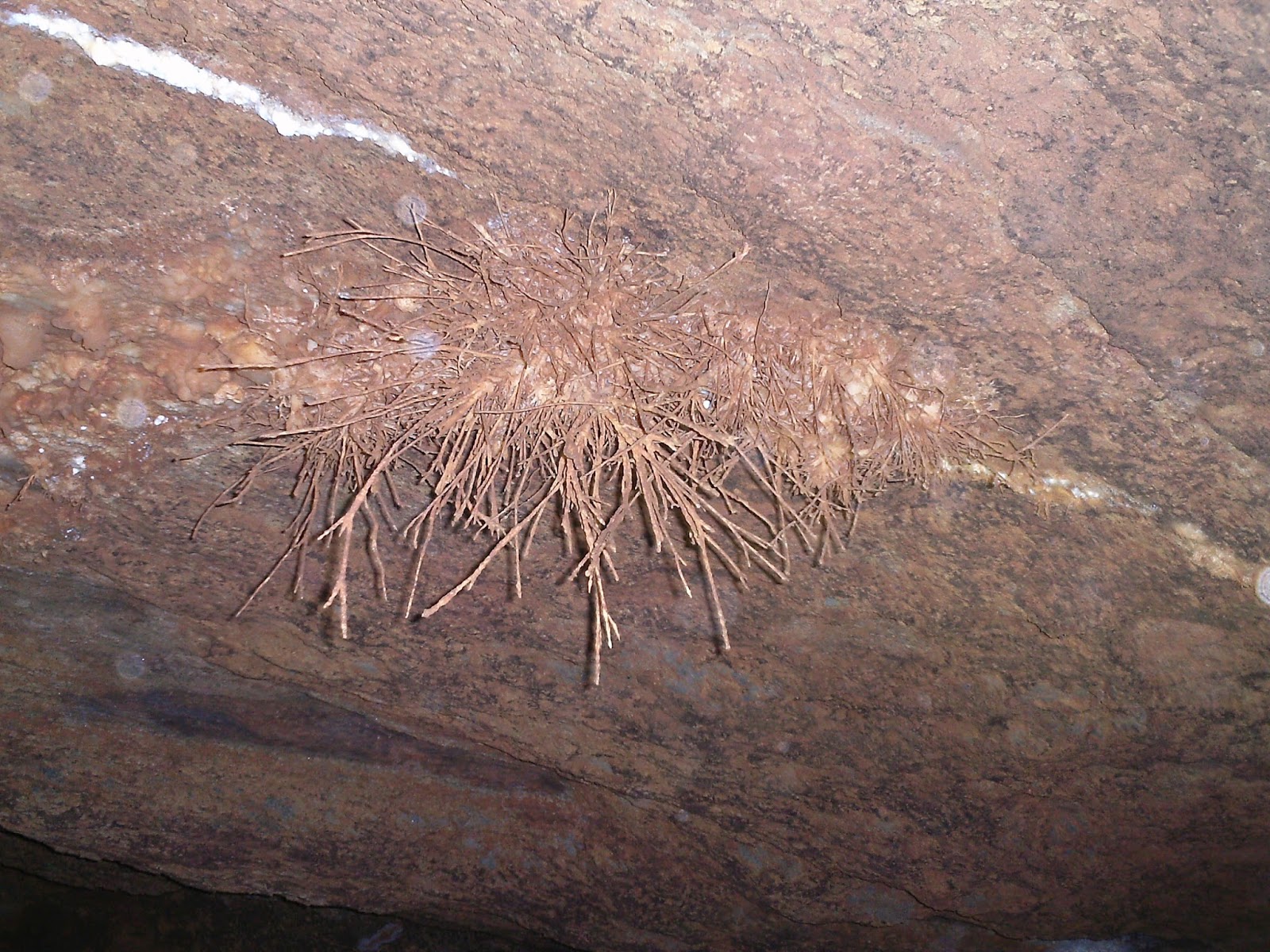 Helictites on the cave ceiling. 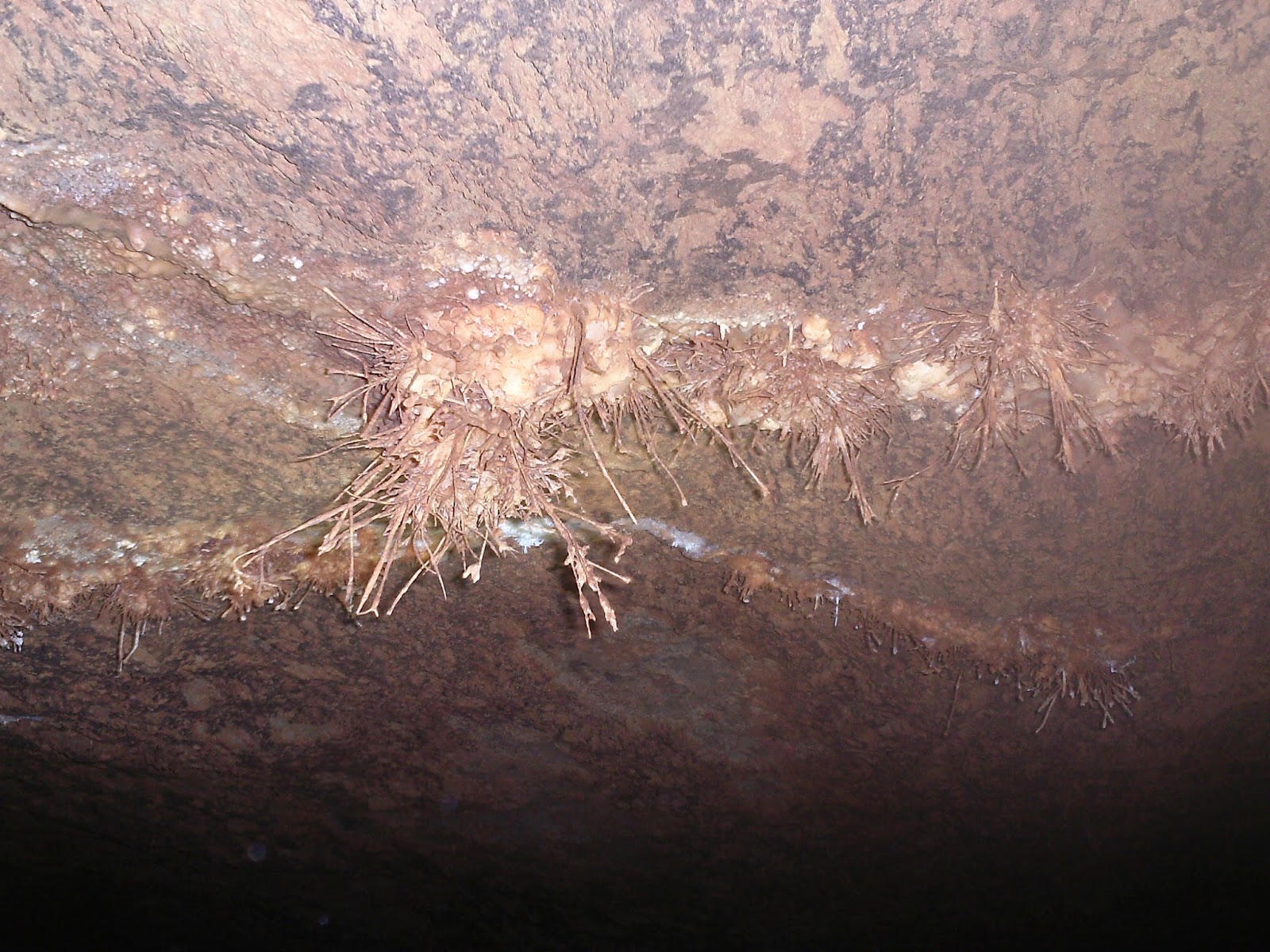 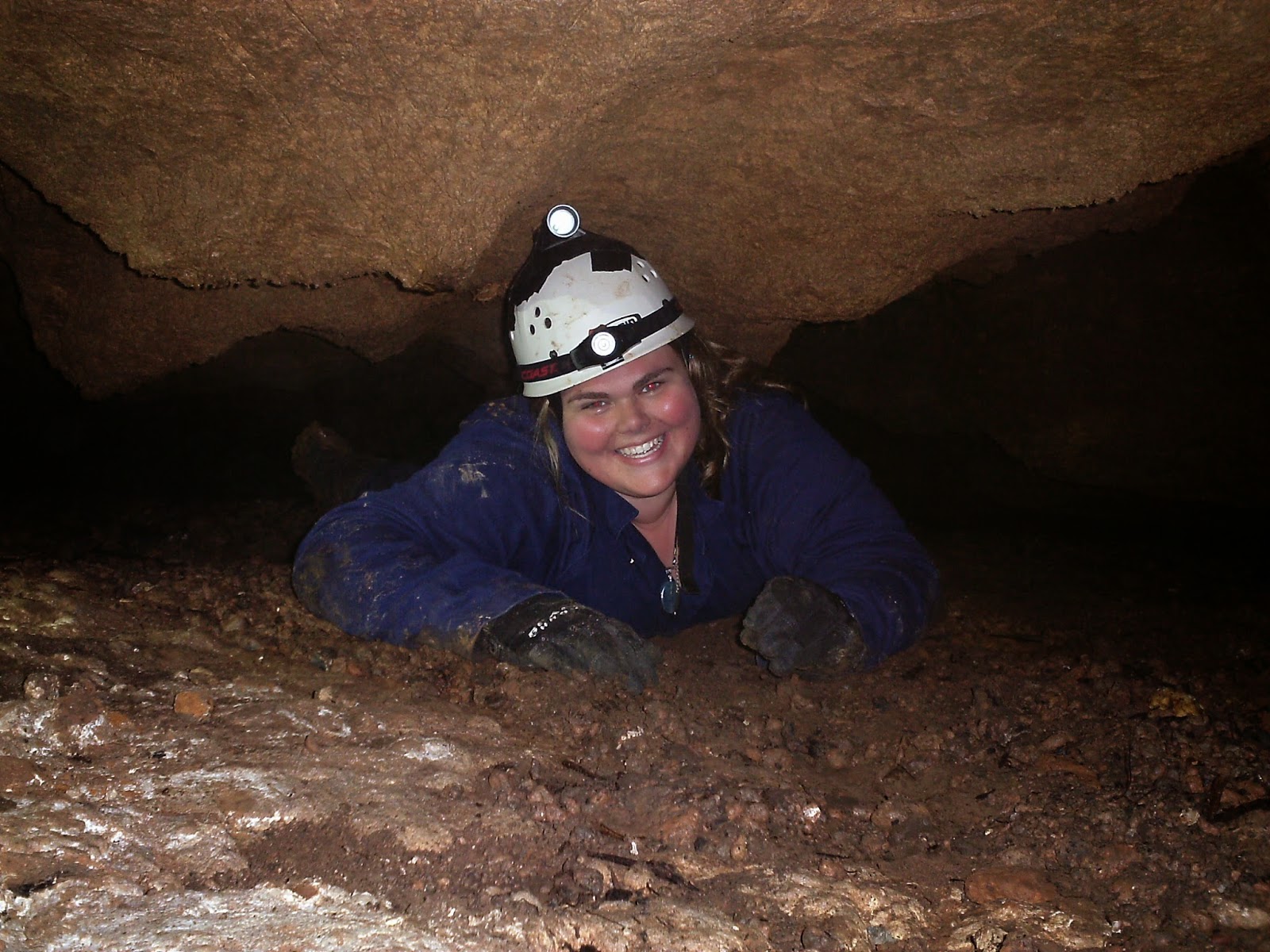 Me in the crawl space. Technically we didn't have to go through this part, but it was heaps of fun and we found a pademelon skull down there. 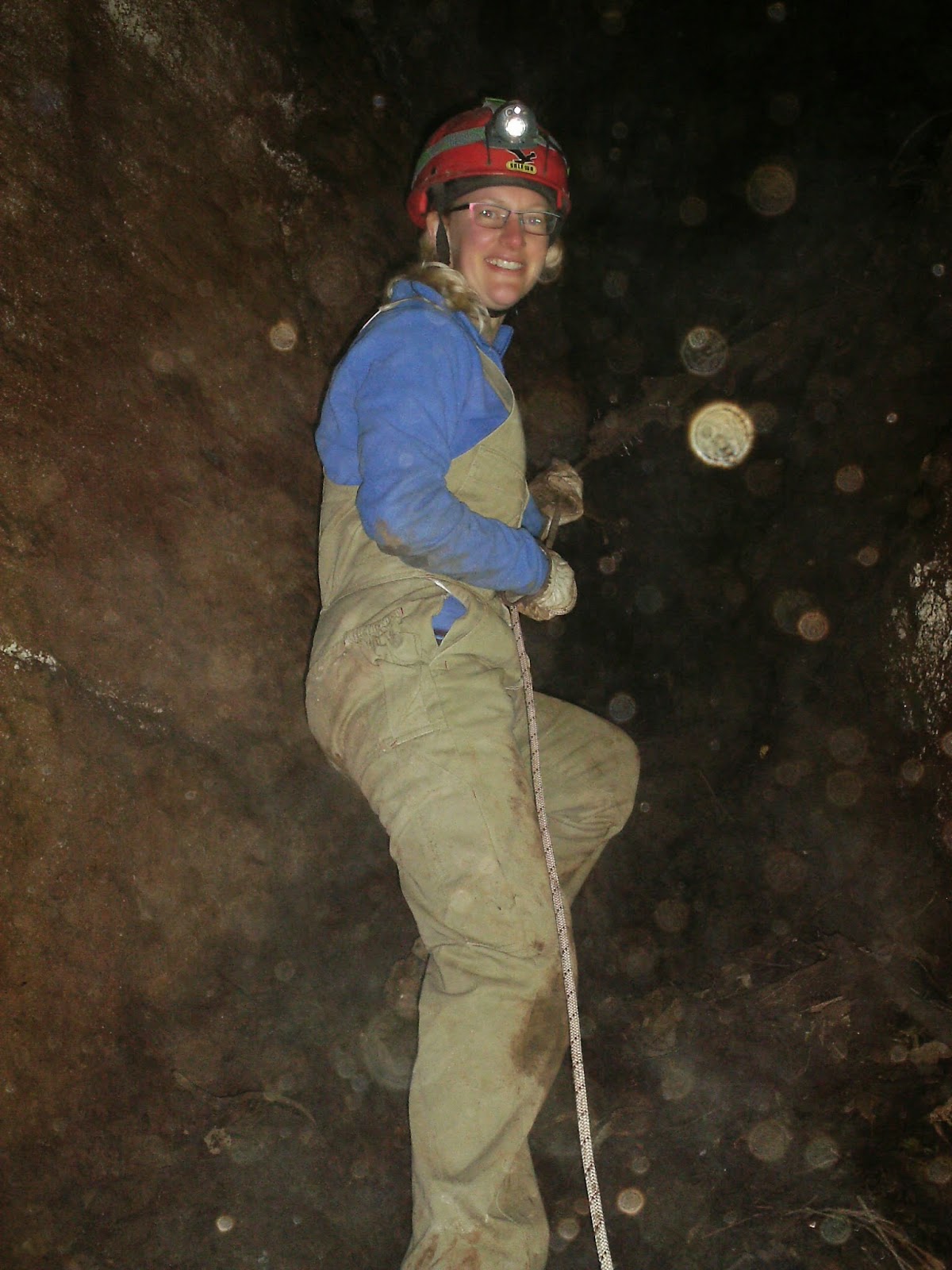 Teresa climbing back up the incline out of the cave.

Sorry about the quality of photos on this post, but there was no way I was going to take my good camera crawling through a cave so these were all taken on my waterproof camera instead.

A Plethora of Pilfering Possums

I have lived in my apartment for close on 2 years, and in that time I have been growing some lovely veggies in my little enclosed courtyard. I have also enjoyed watching the wildlife that lives in the bushland that extends to the back wall of my courtyard, but I have never had any problems with any of that wildlife coming into my garden and eating my plants. Up until a couple of months ago, that is.

I had quite a good veggie patch planted in my boxes and had apple cucumbers, squash, and zucchini all finally fruiting after a very late start to the season. I spent a couple of nights away at the King Sol House, and when I got back it was to find that every single one of my baby cucumbers, zucchinis, and squash had been eaten. I was quite devastated, but I figured that they had eaten everything they were going to eat so I didn't bother doing any animal proofing. A little while later I noticed that since they had eaten all the really yummy things, they had moved on to the less palatable options. The leaves on my strawberry plants started to disappear, followed by my herbs (except the rosemary and chives), and then almost all the pigface that I had been carefully propagating from cuttings I took in Stanley last year. So, I started working on doing some possum-proofing. I spent a couple of hours one day assembling chicken wire and irrigation house into a protective cage to place around the veggie plants. I was pretty proud of my work, and I decided to test it out, so I put enticing food inside the cage, where I was planning to replant some veggies, and set my wildlife camera up to see what happened.

I was very frustrated the next morning to find that a possum had found its way inside without much difficulty. It did have a harder time finding its way back out, but it eventually managed it. 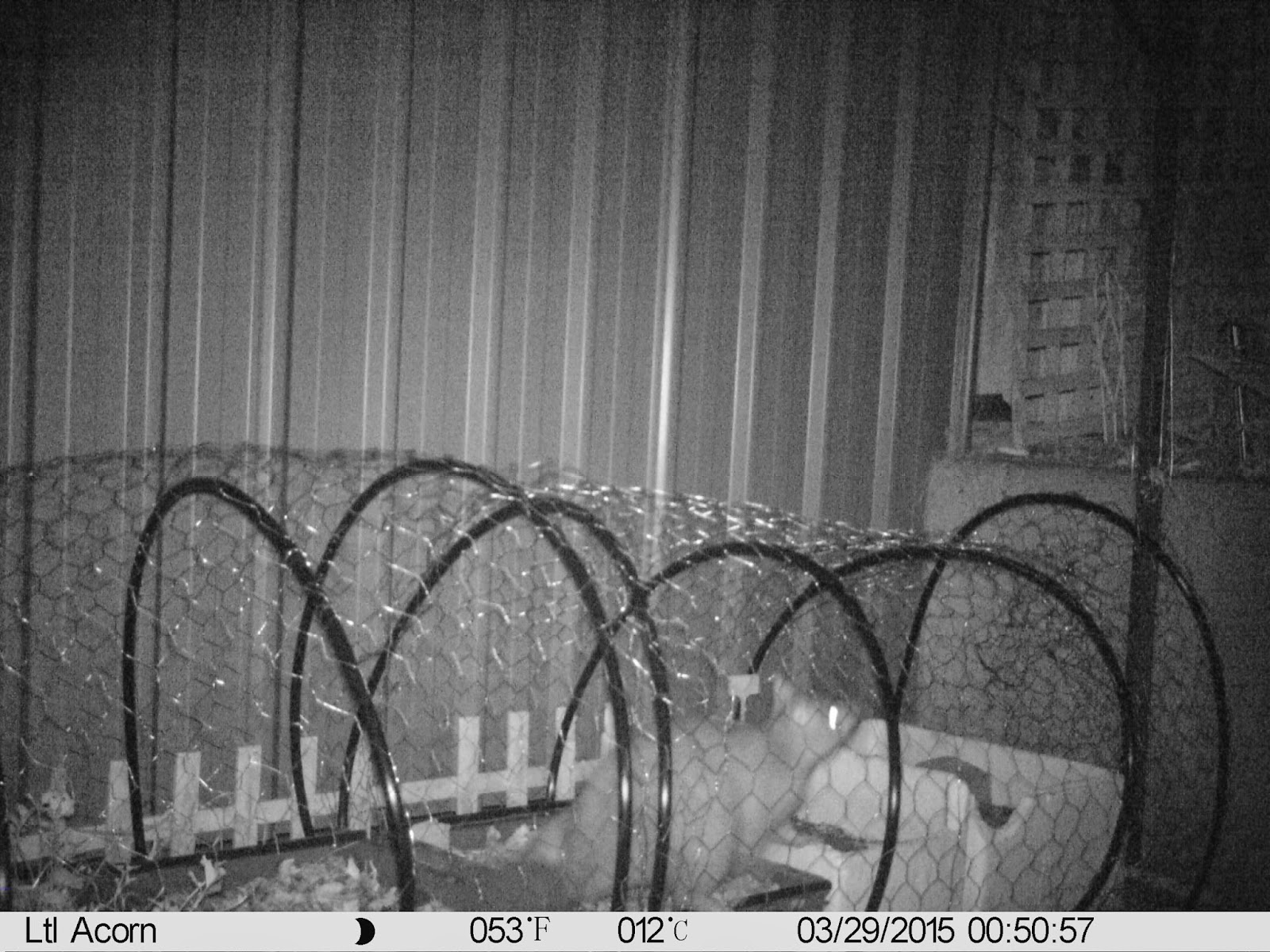 So, I spent another hour modifying my protective cage, placed some more tasty morsels inside and reset the camera (at a better angle this time). This time a mother and juvenile brushtail possum came into the garden and climbed all over the cage trying to find a way in. They were in and out of the garden for over an hour attempting to get into the cage, but they didn't manage it. I did notice, though, that with an adult possum sitting on top of the cage, it bows quite a bit and a possum might be able to eat the top of any veggies that I plant so I'm going to be a little bit more modification to make it a bit less flexible. 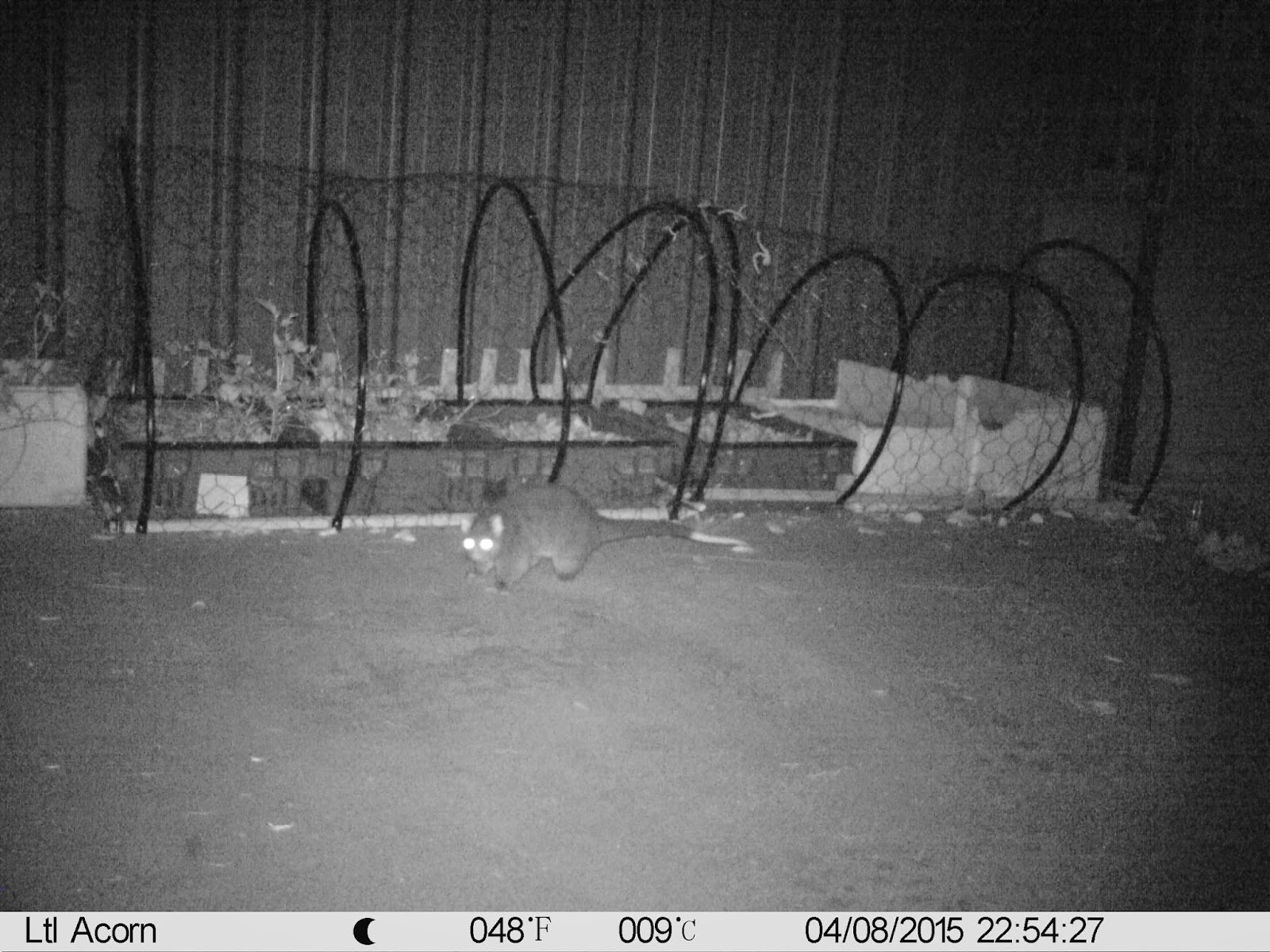 An adult (and quite a large one) ring tail possum! Ring tail numbers have decreased so much that they are quite hard to find usually, and I never expected to see one in my one backyard. I have set my camera up in the bushland behind my place quite a few times before and I have never seen one there so I didn't think we had any. I was so excited that I had to call Mum so that I had someone to tell.
Posted by Emma No comments:

For Easter, I was able to take 4 days off work and head up to Queensland to join up with Mum and Dad in a trip to visit some uncles, aunts, and cousins. Growing up, my whole extended family was located in Tassie, but these days everyone is spread around the country (and sometimes overseas) so it takes a bit more planning and traveling to catch up. Which means that catching up with the family can mean a nice little holiday to sunny Queensland - except that it chose to be rainy Queensland to make us feel at home.

I had a really nice time with the extended family, but mostly we were eating way too much, talking, and just spending time together so I didn't take many photos. We did go for a nice drive up the mountains, and went for a tour of Joh and Flo Bjelke-Petersen's family farm, "Bethany", but I didn't take any photos of any of that for some reason either.

In fact, I don't think I used my camera at all while I was away. Dad did, though. On my last morning in Queensland, we were in Tin Can Bay and we went to the dolphin feeding. There is a pod of Indo-Pacific humpback dolphins at Tin Can Bay that come into shore every morning to be feed fish by tourists. They have been doing so for over 30 years, and the dolphins seem to enjoy their interaction with the humans. The humans definitely enjoy their interaction with the dolphins. Mum, Bec, and I all feed the dolphins and Dad played cameraman for us. 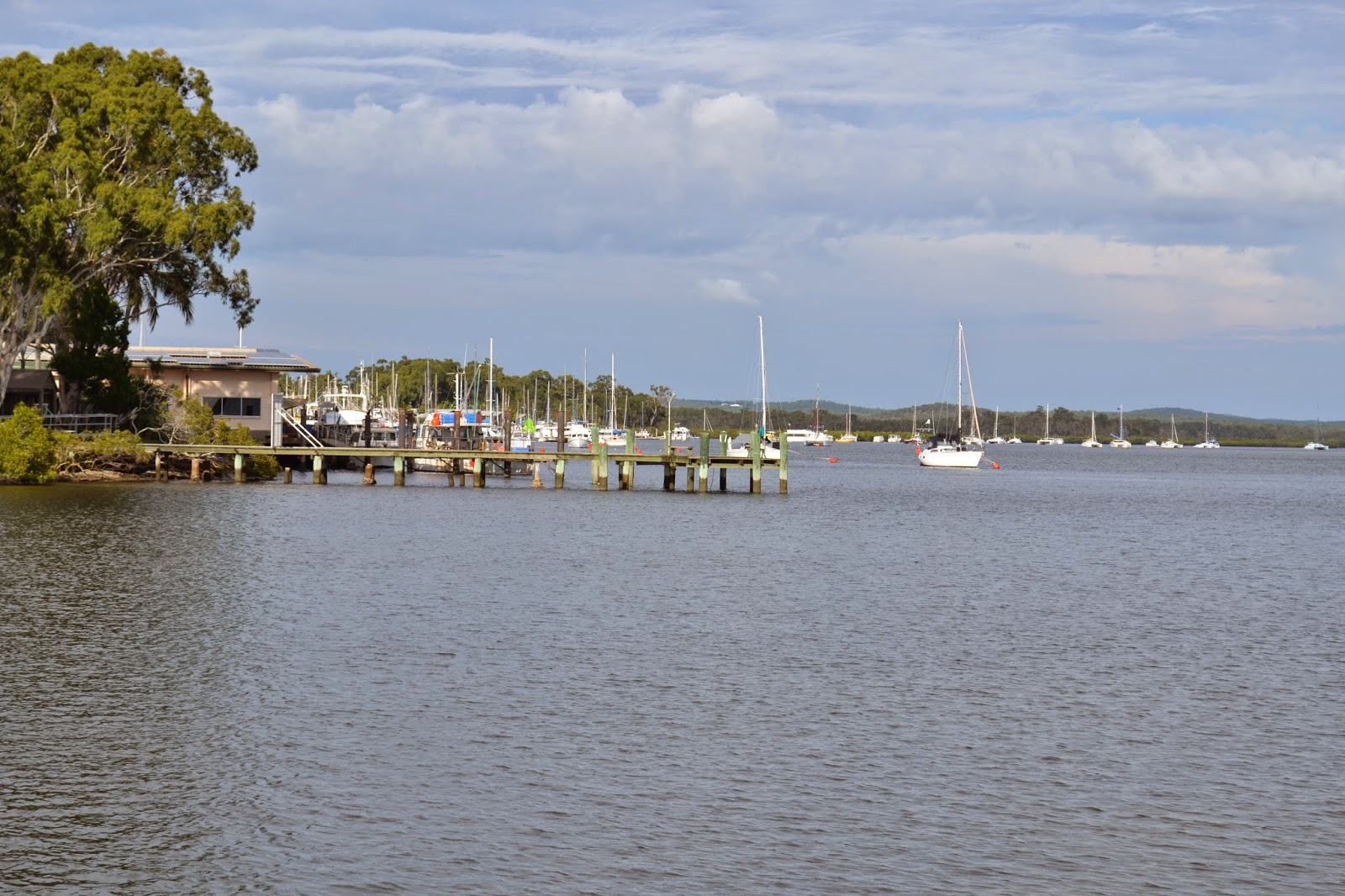 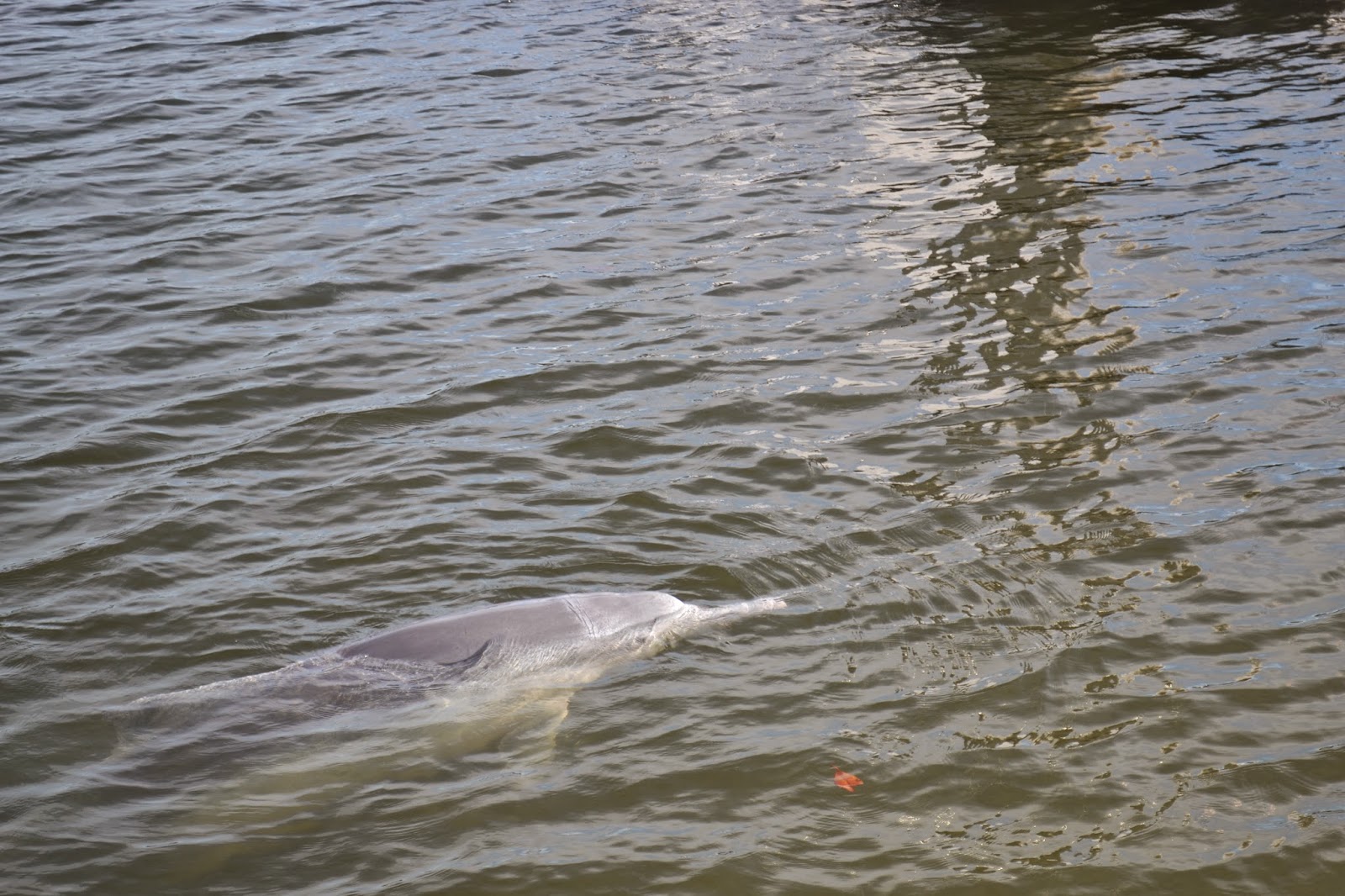 One of the Indo-Pacific humpback dolphins 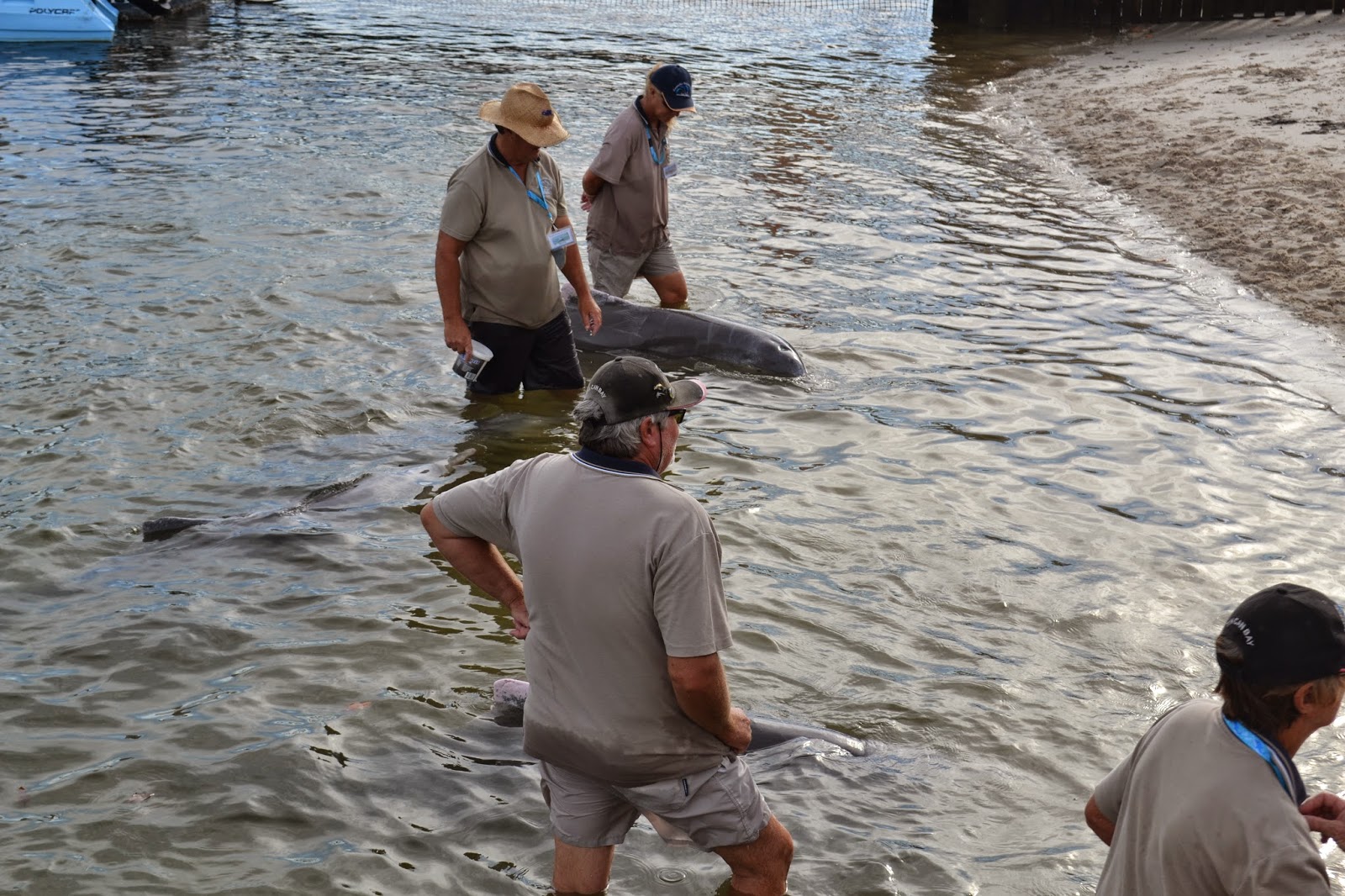 Each dolphin has one local in the water to direct the feeding and make sure that the tourist are obeying all the rules for the dolphin's safety (and possibly for the tourist as well, but they aren't as important). There is also another local whose job it is to keep the pelicans and cormorants from coming in and stealing the fish out of the tourists hands. 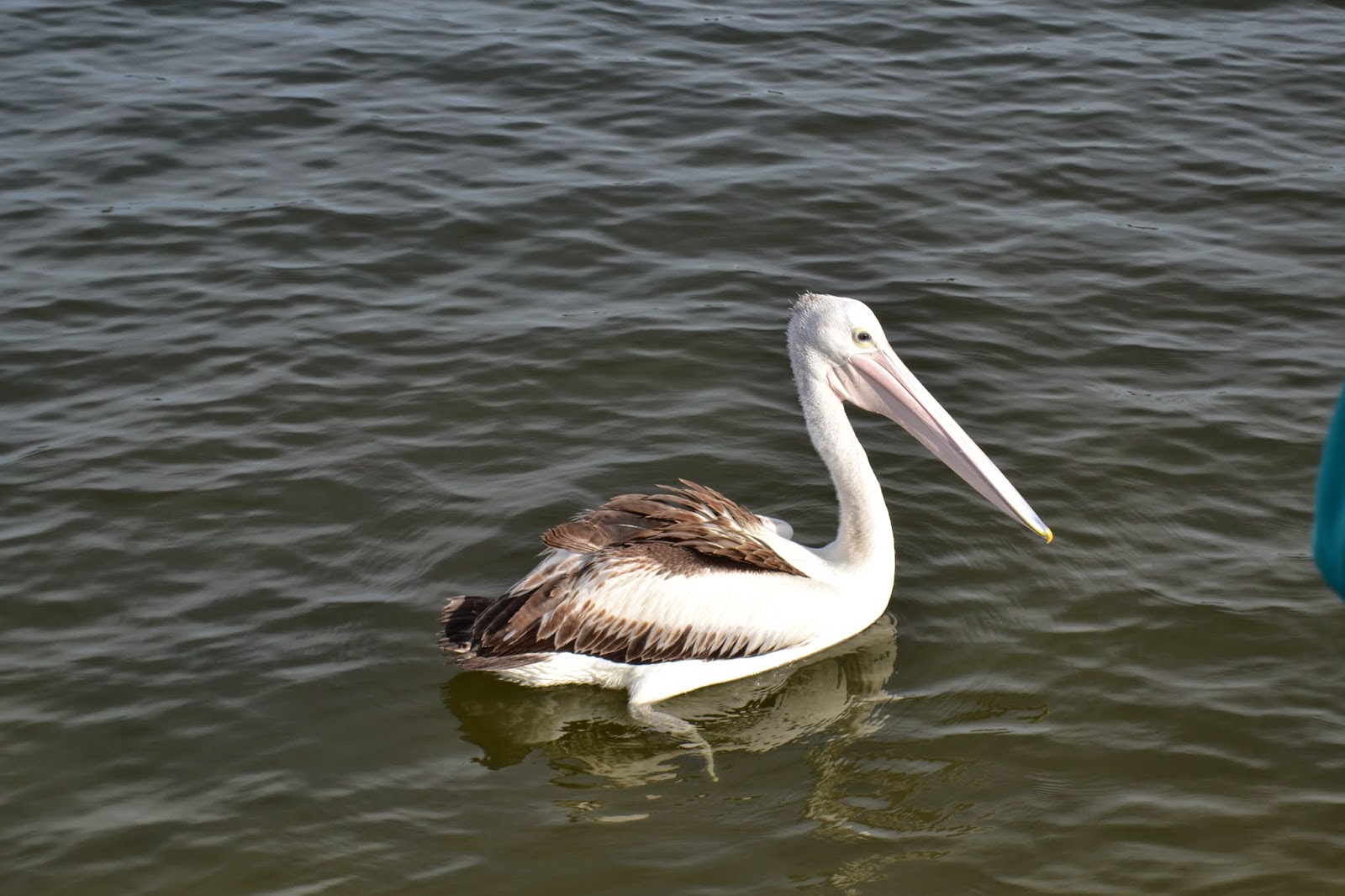 A pelican who would quite like the opportunity to steal some fish. 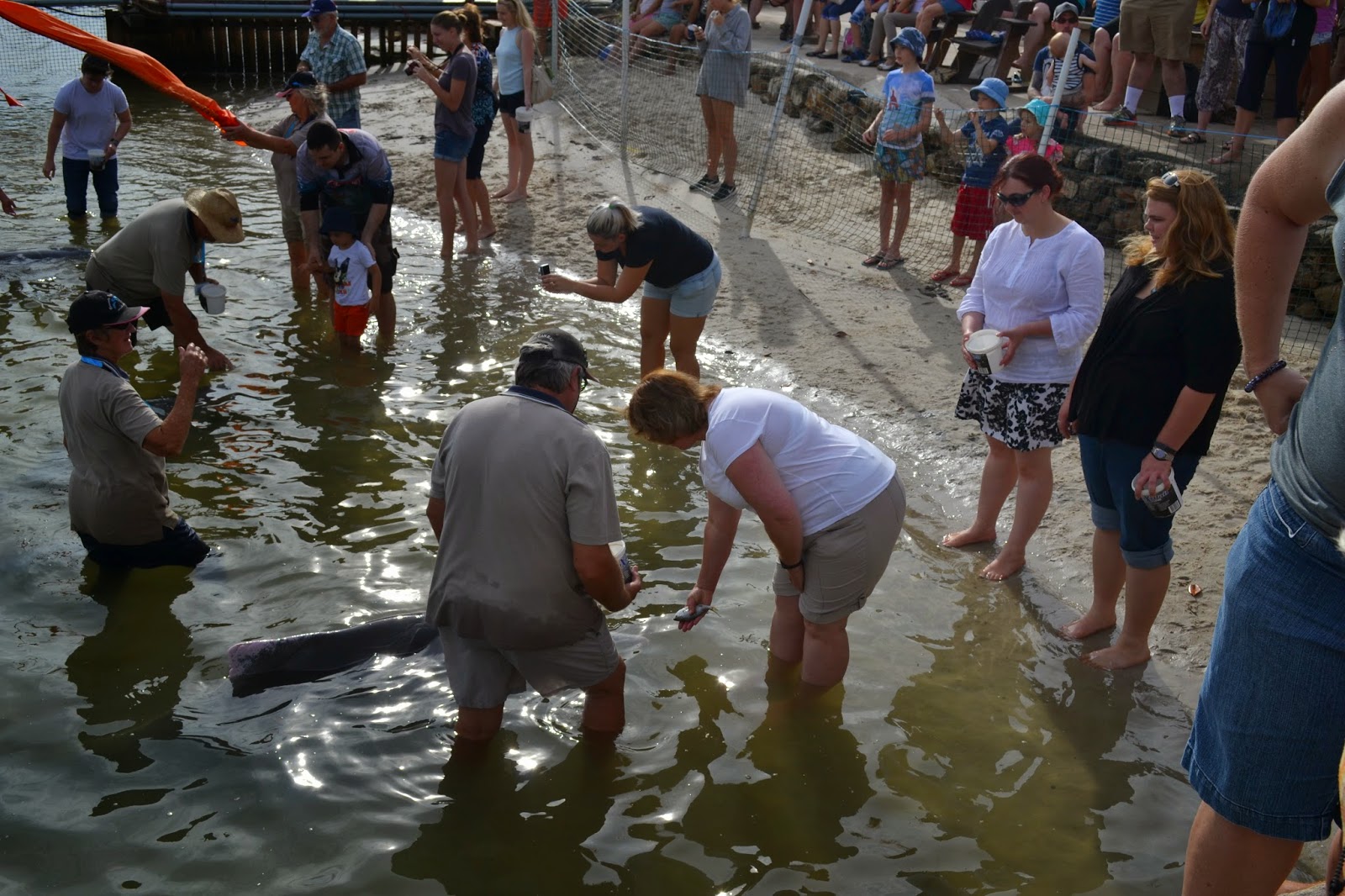 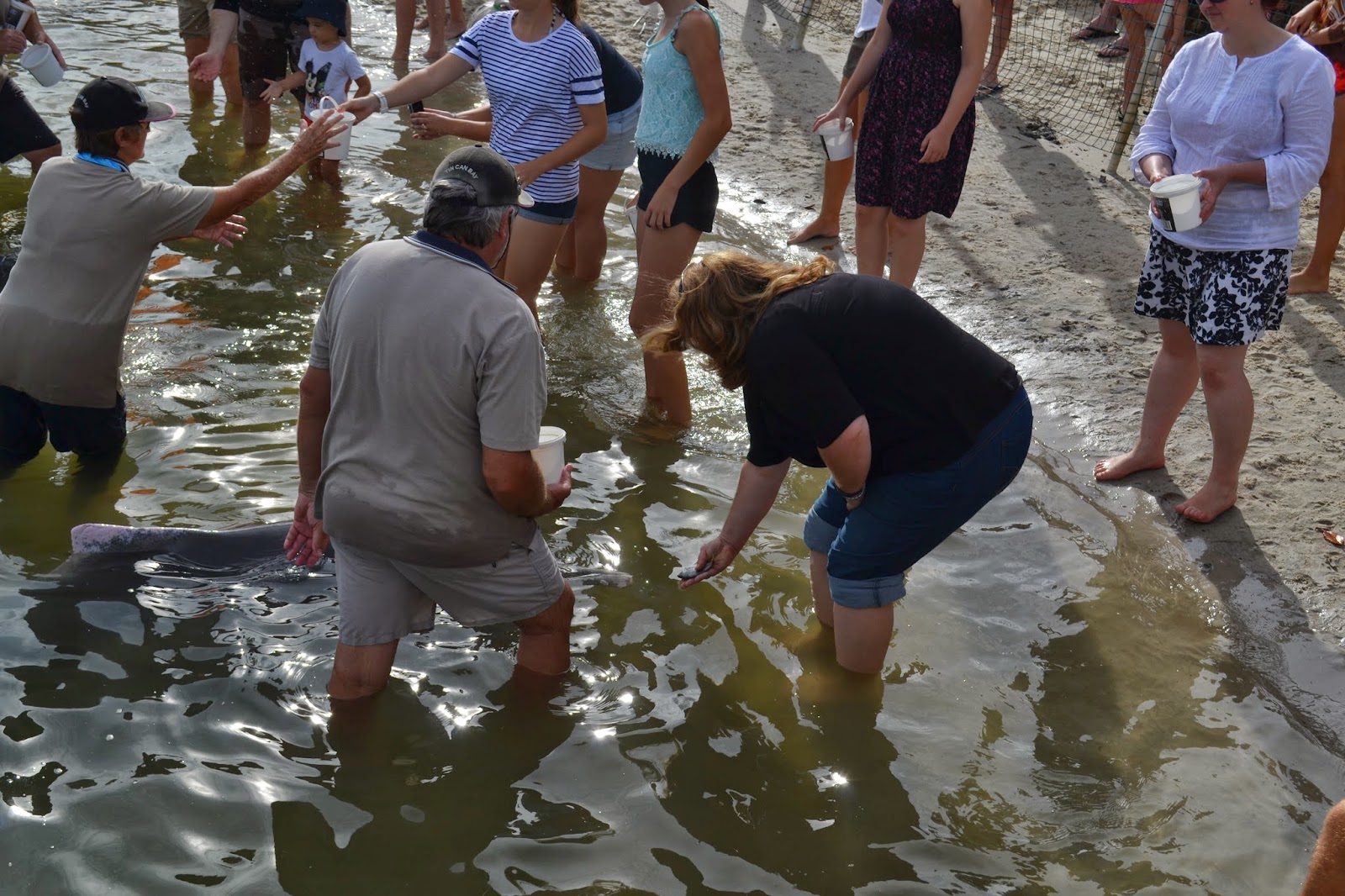 Me feeding the dolphin. 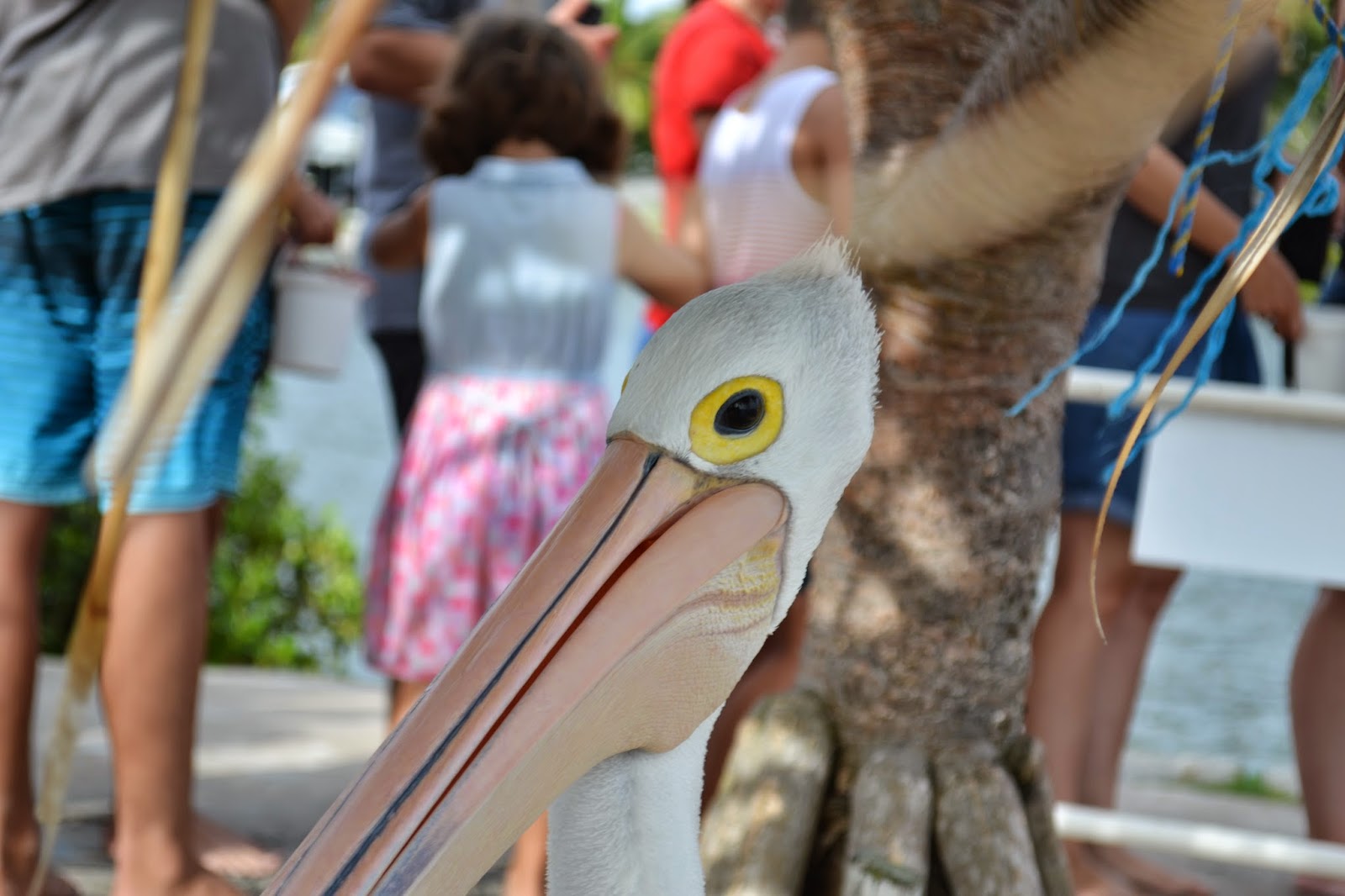 A pelican who wasn't allowed to steal even one fish and doesn't look particularly happy about it.
Posted by Emma No comments: