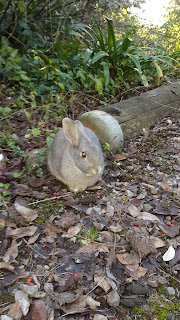 A few weeks ago, I noticed that when I drove up my driveway at night there was often a little grey rabbit in the carpark area. It wasn't until I saw this same bunny in the daytime that I realised it wasn't just a normal feral rabbit or "bush bunny" as they are referred to, but was obviously an escaped or abandoned pet. Given that it had been hanging around our apartment block for weeks at this point and no one had come looking for it, I guessed it had probably been abandoned.

I started to make friends with Bunny, taking him vegetable offcuts, and gradually getting him more and more comfortable with me until he was happy to eat out of my hand as long as I didn't try to touch him. He really didn't like being touched, probably due to some serious trust and abandonment issues. I would visit him in his home under the lilac bushes every morning when I was home (which is most mornings at the moment) and bring him some treats. I introduced my friends Cath and Christine to him on their visits to me, but he was very stand-offish and skittish around them - I think he thought that by bringing a second person to visit him I was trying trap him. 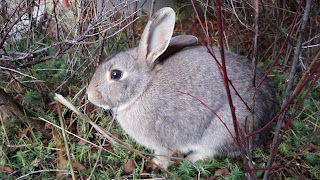 This morning when I went to visit Bunny, I couldn't find him. This is not the first time I haven't been able to find him, but every other time he has made an appearance not much later so I assumed he would soon be back and ready to eat the bits of bok choy I had saved for him. Unfortunately, I have since found that is not the case. Bunny who was almost always around our apartment block had for some reason gone much further away than usual and had been run over not far from the bottom of our driveway. So my bunny tale has a very sad end.

I'm going to miss you, Bunny. Thanks for hopping into my life and brightening my boring mornings.
Posted by Emma 1 comment: