Hampton Road in the city is closed this morning for filming. If you dont have anything better to do this morning, head on down there and check it out (dont forget to take some photos for me).

I am now also able to confirm that, yes, they will be using the Goodwood studios for some of the filming.

The official government media release on the project has details of someone to call to arrange "on-set visits and interviews with key cast and crew" - does that mean that if I ask nicely I might get to go and hang out at the shoot? Check it out here.

Keep your eyes peeled for "random" sightings of Michael.
Posted by Emma 3 comments:

Michael Shanks, an actor made famous by his role in Stargate SG1 as Daniel Jackson, is currently in Hobart!!! Yes, I mean Hobart, Tasmania! A real, live, famous person is in Hobart!!

He is currently here to film "Arctic Blast", a Sci Fi with a similar storyline to that of "The Day After Tomorrow." He is rumoured to be shooting a scene in Salamanca, but I cant find out exactly when he is going to be where (surprise, surprise he doesn't want to be mobbed by geeky SG1 fans. Yes, I do realise that I just called myself a geek.).

While this isn't as cool as if it were Jason Momoa (Ronan Dex) or Christopher Judge (Teal'c), its still pretty awesome. So, Hobartians, make sure you keep your eyes peeled while you are around the city for the next few weeks, and if you do happen to run into Michael make sure you grab a couple of autographs.
Posted by Emma 6 comments:

Forks are a very important invention when one is trying to obey the social norms of a civilised society. I expect that if I lived the life of a hermit I would find that, will forks are useful, they are not of critical importance. However, as I do not live the life of a hermit (most days) this is a rather irrelevant observation.

Today, I lost my fork. I'm sure I put a fork in my bag with my lunch, but when I got my lunch out of my bag the fork was no where to be seen. While this would be an intriguing mystery it would not have presented a problem if I had been eating a sandwich for lunch, but as it was pasta in a rather messy tomato sauce that was on the menu it was a slight issue.

Being forkless, I had to try to find a fork or a similarly efficient means of conveying food to my mouth, such as a spoon. I went downstairs to the staff tea room to heat my pasta in the microwave and hunt out a fork. The staff room is a very interesting place in the school of zoology. As the zoology building is built against the incline of a rather steep hill, some parts of the building have more floors than other parts. In fact, level 4 (the second highest level in the building) actually becomes ground level at the highest point of the hill. Technically, the floor where the tea room is located is level 1, but there is a second level 1 on the other side of the building and they don't meet up, and half of level 1 is actually underground. Even though the only truly important thing on level 1 is the tea room, it is technically the main entrance to the building. Most undergrads, however, live in complete ignorance that level 1 even exists, which, I think, is exactly the way the staff like it.

Approximately 95% percent of the time, the tea room exists in a lonely state of complete unoccupation. However, between the hours of 11:00am and 11:20am Monday-Friday it becomes a hive of activity crowded with recently re-caffeinated academics. On Wednesdays, affectionately termed "cake-days" by said academics, the room is packed to overflowing as everyone crowds around to get their slice of cake. If you want to take a popular piece of equipment or vehicle out into the field to do research, the best time to do it is a Wednesday morning as no-one else will be using it. They will all be at "cake-day".

Enough about the tearoom, back to the hunt for the fork. The first place I looked was in the cutlery drawer, which I deemed to be a sensible place for the storage of surplus forks. However, the cutlery drawer contained neither forks nor spoons, but merely a motley arrangement of knives. I surmise that this intriguing observation might arise from the propensity for staff here in the school of zoology to "borrow" a fork or a spoon with which to eat the lunch that they have heated up in the microwave, go up to their office so they can eat their lunch while watching clips on you-tube, and never return the fork or spoon to the tearoom because that would require walking back through the rabbit-warren of corridors and traversing at least one, but in most cases two or three, flights of stairs. Knives, on the other hand, are rarely needed and, therefore, do not get stolen (sorry, "borrowed") on a very regular basis.

After some more hunting, I eventually found a fork standing in a coffee mug and was able to eat my lunch while obeying the social rules of civilized society.

But I still don't know what happened to my fork.
Posted by Emma 3 comments:

You know, I have just been putting a heap of important stuff into my diary (when things are due, when I have seminars, workshops and conferences - that kind of thing) and I just realised that its only 2 and a half months until my birthday.

I have decided that this year I am definately having a party. I didn't have a 21st party because I was in the middle of exams on my birthday (as I have been for the last three birthdays), but I promised my friends that I would have a party eventually - I was just postponing it. I wont be in the midst of exams this year because I dont have any (he he he, to all my friends that do) and I wont be far enough along in my honour's project to be too snowed under with work.

So, any suggestions what I should do for my party? I want a costume party. Maybe, 'dress up as your favourite tv character'? Or should I have a murder mystery party (downside with that is that you can only have 8 guests)? Or should I have both?
Posted by Emma 5 comments: 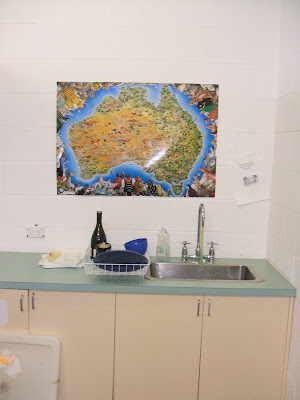 This is the kitchenette sink in my office. 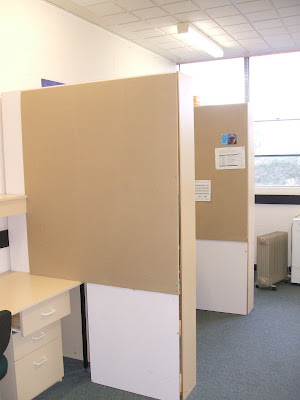 This is a view of the layout of my office. 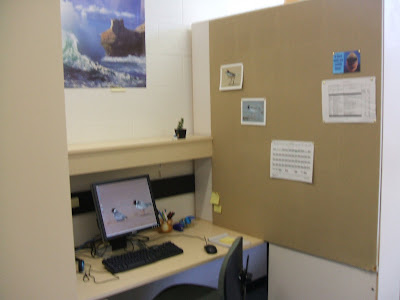 This is my office. 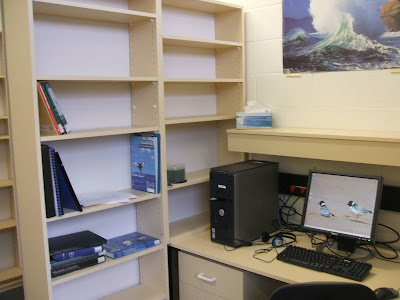 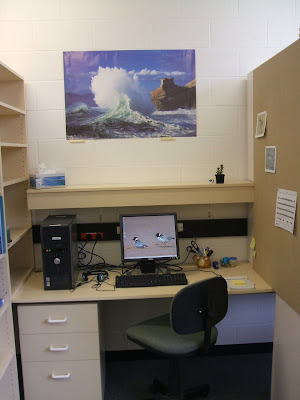 Just a quick note to say that I am intending to blog again soon - I am just waiting for my new poster to arrive in the mail so that I can take some photos of my new office and upload them as some of you actually seemed interested in seeing it.
Posted by Emma No comments: 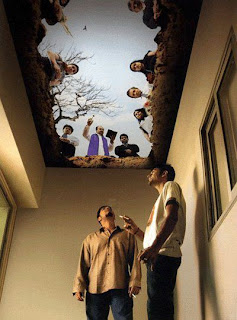 This is a mural on the ceiling of a smoker's lounge at a resturant in the US. Pretty cool, eh?

Watch out world, I'm back on campus!!

Well, its official - I started honours yesterday. I didn't do any actual work or anything, just a heap of introductory stuff like getting our swipe cards and keys to the building, being assigned our offices and computers, getting our pin numbers to the photocopy machines, and meeting all the technical staff and important people.

My office is in one of the 'honours rooms'. There are several of these rooms, each one having 6-8 offices in it. The office itself consists of a large desk with a computer on it, with a shelf above you, a bookcase dividing your office from the one next to you on the left, and a pin board on the right. Although there are 6 offices in my honours room, I am only actually sharing it with one other person (I think he said his name was Tom). The rest of my cohort are in the room next door which is completely full. I was a little annoyed to be the only one separated from the rest of my cohort at first, but now I'm thinking it is probably a good thing because their room is going to get pretty noisy when everyone is around. There is also a little mini kitchenette in my room which they don't get.

My cohort consists of five girls, all of whom I went through my degree with. Its nice to be going through this with people you already know; it makes it ever so slightly less daunting. Even so, after the honours coordinator had finished with us yesterday we were all feeling pretty daunted.

I cant really do much work until my supervisor gets back from Japan in a few days time (yes, I finally managed to track him down and that's where he was). That doesn't seem to matter much, though, because the one most important thing an honours student does in the first few weeks of research is, apparently, decorate their desk area. I'm currently working on that :)
Posted by Emma 5 comments: