Good news - I have FINALLY managed to get hold of the man that I would like to become my honours supervisor. I have an appointment with him tomorrow afternoon to discuss potential honours projects. I have been researching all morning to prepare so that I dont waste his time.

Oscar Wilde's A Woman of No Importance is on at the Playhouse Theatre here in Hobart running from the 24th of April (yesterday) to the 9th of May.

I am very interested in going and if you would like to come with me then the more the merrier.

For more info (times and prices and such) go to
http://www.centertainment.com.au/19829.html
Posted by Emma No comments:

I can't believe I forgot to tell you this: I'm a murderer (and a few other things as well).

Last Saturday was Tiani's 21st birthday 'How to Host a Murder' Party. It had a gangster type theme and was set in 1920's Chicago.

I played the role of 'Silky Madam,' an elegant and enterprising widow with an exclusive club (that later turned out to be a high class brothel). I dressed up for the role in my shiny blue evening gown, a (fake) fur stole, and a long strand of (fake) pearls, with my hair curled in a vaguely 1920's style. Everyone else dressed up as well - a 'straight-laced' district attorney, a journalist, a rising star baseball player, a high stakes gambler, a dedicated golfer, a sultry club singer (who previously worked in my noble establishment), and a beautiful socialite with a talent for driving fast cars and wielding tommy guns.

The storyline was more convoluted and complicated than the other 'How to Host a Murder's I have played, but we managed to sort most of it out and piece it all together before it was all revealed in the end. Only one of the players guessed that I must be the murderer, though, and none of us (me included) had figured out what my motive for killing the notorious crime boss, Hal Coppone, could possibly be. Turns out it was mostly that I ended up in the right place at the right time and I wanted his money.

It was a lot of fun, but I forgot to take any photos of us all dressed up, sorry.

The funniest thing is that two of Tiani's friends still don't know my real name as we only referred to each other by our character names and, if I run into them again, will probably call me Silky, especially Ed (Billy, the baseball player) because he called me Silky so many times throughout the night:
"Silky, can you please pass the ..."
"So how do you know Tiani, Silky?"
Posted by Emma 1 comment:

I have been quite slack about posting lately. I just haven't really felt like it. I have been focusing my attention, rather, on the "Improvement of my mind through extensive reading." (anyone who knows where that quote is from has my "unswerving allegiance" - same goes for that one).

Anyway, do you want to know about Easter?
Here it is:

I spent Easter with my Mum, Dad, Brother, and Cousin (Clinton). We went camping. We like camping.

We decided that we would set up a standing camp (that means you stay in one place) rather than travel as much as we have done most other Easters in recent years. But we still traveled quite a way from home to Arthur River on the west coast to set up our standing camp. We camped next to a lagoon with only a sand dune in between us and the ocean. Exactly where a Marine Biologist should be. 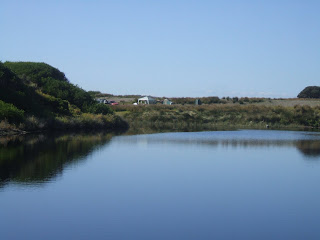 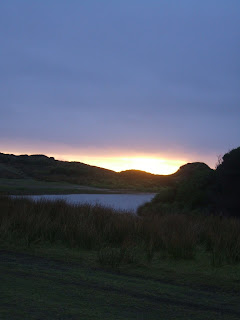 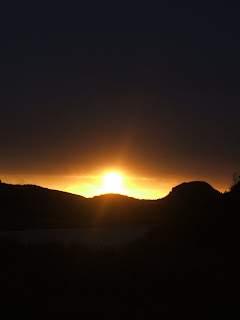 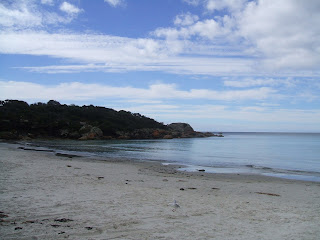 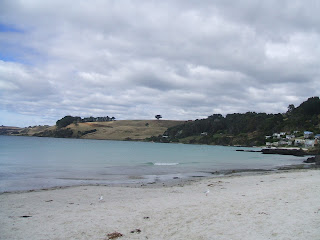 It was really nice to have some time with all my family when they couldn't be distracted by work. We played Monopoly. I had been having serious monopoly withdrawals, but I have had my fix now. It took us over 3 hours, but in the end Rob had finally managed to send everyone bankrupt. I was the last to surrender to him.

I am redoing my Workplace Level 2 First Aid. Last time I did it was back at school in Grade 12. I had a great time then playing around with a group of friends, heaps of bandages, and a couple of dummies.

This time I am playing around with a heap of people I've never met before, heaps of bandages, and a couple of dummies. I had more fun last time.

This time isn't bad, though. I'm enjoying doing something where I have to learn stuff (and the exams are really easy). When I first walked in this morning and saw a room full of blokes and only a couple of seats left I was a little worried that I would be the only girl - and that I would be the only one under about 37 years old. It turns out that there are three of us girls (all of the remaining seats). Everyone else are from two seperate workplaces and come as big groups of people that already know each other so us girls get to work together which is nice.

And this time there are some new things added into the course and some "accepted practices" have been adjusted so there is some new stuff to learn.

Anyway, I graduate tomorrow - and then its Easter. YAY!
Posted by Emma 1 comment: