The poll has closed and the results are in:

In all 6 people voted (not bad considering). In last place is .... Rose Tyler. 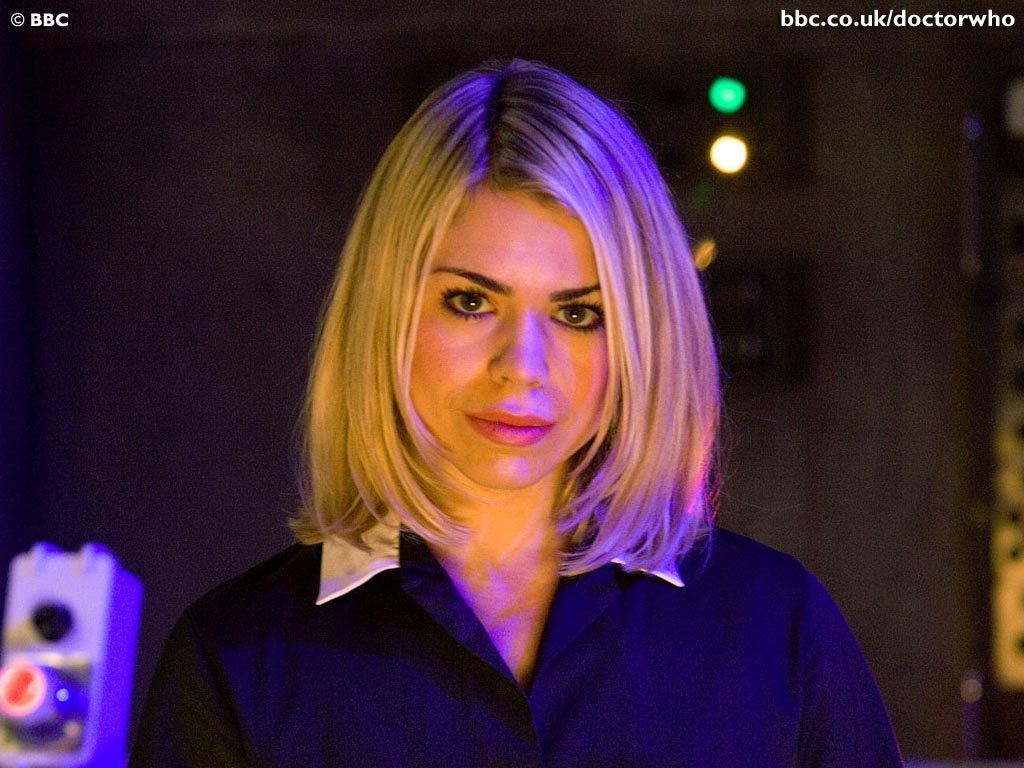 Rose got no votes. No surprise there.

Martha got 1 vote (16%). Not bad, but Martha unfortunately made the same mistake as Rose - she fell in love with the Doctor.

Amy got 2 votes (33%). A very good result considering that she is so new. I didn't vote for Amy but she is quickly growing on me. She has shown some inclination towards falling for the Doctor, but as long as she avoids that I think she is going to be a great companion.

Donna got 3 votes (50%). I think the reason that Donna is so liked is two fold. Firstly, she didnt fall for the Doctor which makes for a more interesting companion because she got to think for herself a bit more. And secondly she has an awesome Grandad.

Thanks for voting.
Posted by Emma 2 comments:

Not much news in my world at the moment, but I thought that I might as well post anyway. I'm currently in Devonport staying with Rob and doing nothing (which is pretty much what everyone does when they stay with Rob). I am doing even less than usual though because I am experiencing quite a lot of difficulty in staying awake at present. The complete crash and burn I was expecting to hit me two weeks ago after I finished my thesis was considerably delayed but has now finally hit me. And its hit me hard.

I came up on Tuesday to spend the evening with Rob and spent the night on his couch rather than in the spare room because it was nice and warm there and that way I would have to wake up when Rob was getting ready to go to work and I could say goodbye. That was the plan anyway. In reality Rob got up and came out and had breakfast and made lunch and talked to me and I slept right through the whole thing. When I did wake up I was completely disoriented and had no idea where I was for a few seconds. It was quite a strange feeling.

Today is Rob's birthday so when I woke up this morning when his alarm went off at some unearthly hour I deliberately made myself stay awake until he made it out into the loungeroom so that I could wish him happy birthday. Mind you it was three episodes of Black Books before he did finally make it out and left. I then promptly went back to sleep.

In other news, Rob and I played Portal last night so I have now finally played it. Some bits I actually played (all the tests at the beginning) and some bits Rob took the controls and I gave instructions (I dont have quick enough game reflexes because I hardly ever play). It was quite good, but I still like the Monkey Island series better.

It looks like I have a pretty full couple of days ahead of me so I am going to try to stay awake for them. We'll see how that goes.
Posted by Emma 1 comment:

Also check out his others on YouTube. Some of them are brilliant. I quite liked his Britain's Got Talent/Dr Who crossover as well.
Posted by Emma 9 comments:

I submitted my thesis....

Ok, so I know that some of you expected me to post this earlier, but sitting at a computer and typing was not something I felt like doing up until now.

I handed my thesis in on Monday a bit before 4pm (it was due at 5pm). I could have handed it in earlier, but I took an hour off for lunch with my friend Bec while I waited for one of the other honours students to finish printing out her thesis so that we could all hand them in together. I handed in 3 copies to go to the examining panel to be (hopefully) approved, and a further 4 copies to uniprint to get bound. In the end, I wasn't too unhappy with the quality of my thesis. It isn't as good as it could have been if I had somehow managed to find a bit of extra time to polish it, but it wasnt as bad as I thought it was going to be. Considering I have been averaging about 4-5 hours broken sleep a night and I can barely form verbal sentences, I'm surprised that my writing is still fairly coherent. I only got 2.5-3 hours sleep Sunday night, but I managed to survive the day without even having any caffeine until after I handed my thesis in. Every other day for the past two weeks, caffeine has been my constant companion.

Mum came down to Hobart and met me at my place when I got home from uni and then we went and partied with Tiani, Andrew, Moose, Alysha, Han, Dot, Colin, and Robear to celebrate. Moose and Tiani both just had birthdays so it was kinda a shared celebration for everyone. They decided that I wasn't caffeinated enough at this point so they took me out for a walk down to Maccas to get frozen cokes. So after a coffee, three glasses of normal coke, and a frozen coke I was feeling pretty excitable while we played twister, celebrity heads, and cards. Eventually Mum and I went home to bed, but surprisingly I spent the night waking up from thesis nightmares the same as I had all week - I thought I would go back to being good at sleeping after I submitted my thesis, but apparently I was wrong. I was awake by 7am, and gave up and got out of bed around 8am which was a very disappointing effort at a sleep in.

Anyway, now I am up north at Mum and Dad's relaxing, rejuvenating, and recovering. I still didn't sleep properly last night and was up at 8am again, but I think its slowly going back to normal. Fidget and I are home alone and spending the day doing nothing, but she is much better at doing nothing than I am so I built Dad's new DVD tower (flat pack) while I was trying to do nothing and watch Midsommer Murders.

Here's some photos of my office at uni where I spent the last few weeks almost entirely. I packed everything up and took it home yesterday, but I thought you might like to see what it used to look like. Remember you can click on them to enlarge if you need to. 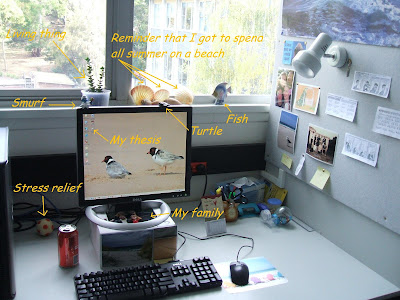 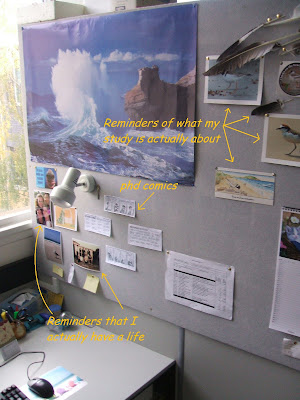 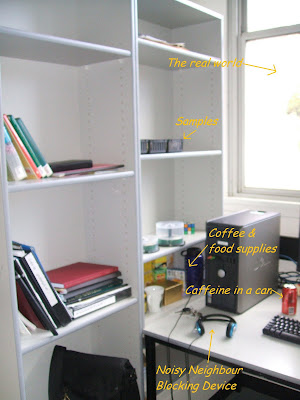 I'm in for a really long 4 days to finish my thesis. Prayers, caffeinated beverages, and help celebrating at the end would all be very greatly appreciated.
Posted by Emma 3 comments: