Because the drive to and from the devil compound at Cressy everyday is so boring we have invented many ways of keeping ourselves occupied - the main one being stopping at JJ's every morning for coffee and treats. The otherday, however, when travelling in the vet's car instead of with the other keepers I found out about a brand new one called "The Cressy Challenge".

The rules of The Cressy Challenge are as follows:
The Challenge operates between the 60km/hr signs at each end of Cressy. Between these signs you have to count the number of "Real People" you can see. A Real Person is defined as an adult that takes at least two consecutive steps forward of their own accord (this will make more sense shortly). Any children are termed "Aliens" and do not count, and any people standing still or sitting down are "Cardboard Cutouts" and do not count. An adult that is holding hands with a child while they are walking is actually a Cardboard Cutout being towed along by an Alien and not a Real Person after all (see that bit up there makes sense now). Adults walking dogs, pushing prams, or mowing the lawn are also Cardboard Cutouts being made to look animated so that no one notices that the Aliens are taking over the town. The other day while driving through, although there were heaps of Aliens, we did not see a single Real Person. Obviously, Cressy has now fallen to the Alien invasion.
Posted by Emma 1 comment:

So, I've been steadily employed for a while now and earning decent money for the first time since I started uni. You might think that the sudden luxury of having spare money around would send me into a shopping frenzy, but I have been very good and very restrained. I have not bought piles of new clothes or shoes or craft stuff or even bought myself the new mp3 player I want, but it seems that my one weakness has been books.

Today, I collected my new box set of Harry Potter books from the post office, shipped directly from England. I checked around a fair bit before I bought these and managed to get them for just under $80 (including postage)- not bad considering the average price is $130-$150. 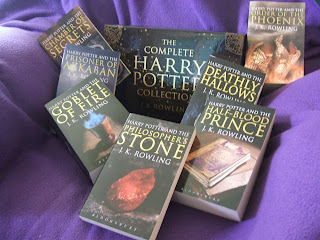 But my biggest book blowout has actually been on zoological books. I went into Angus and Robertson in town (which very rudely moved location while I was living in Hobart) to get a book on Tassie Devils because I figured I should know something about them now that I work with them, and walked out with the book I went in for plus one on koalas. A week or two later, I went back into Angus and Robertson in town (which very considerately had stayed put since the last time I was there) to get nothing, and walked out with a rather expensive field guide to Australian mammals. I have now banned myself from Angus and Robertson and would greatly appreciate it if it would move locations again to somewhere I cant find it. 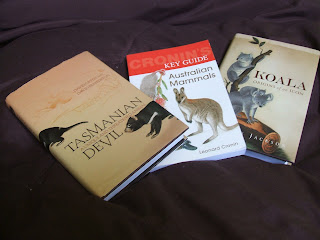 Then, of course, I had to go into Koorong to investigate rumours of a new Francine Rivers and walked out with a copy of it to add to my collection. I personally own 18 of her Christian novels.

And then, just to make sure I had enough reading material to get me through a nuclear winter, I went to all the second hand book shops in Launnie to try and find the missing book in Laurie R King's Sherlock Holmes/Mary Russel series. Unfortunately, none of them had it at the time so I had to go home and buy it on ebay.

So, if you need to borrow a book you know where to come.
Posted by Emma 2 comments:

I've been meaning to post these photos for a couple of weeks now. This is a hand stitched baby blanket I made for my friend's baby boy, Blake. I made a similar one for a friend's baby girl a couple of years ago, but this one has several improvements. I thought the blogosphere might like some photos. 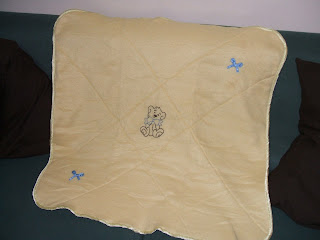 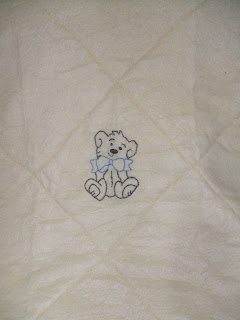 I haven't blogged much lately so I thought I should, but as I haven't got anything interesting to say I decided to post a little bit of random wombatness. A few weeks ago, I had the pleasure of meeting a lady at work who looks like a wombat. I immediately saw the resemblance and was quite pleased to discover that so did my workmates. This little piece of fiction was born out of that meeting and will eventually make its way into a story I am slowly writing.

"As Mrs Brown walked into the classroom, Tess was instantly reminded of a wombat. Mrs Brown was very short, and, although Tess was only 12 years old, she was already at least a head taller than her newest teacher. Mrs Brown's arms and legs were short and stumpy, but the dark maroon polished nails on each of her stumpy fingers were long and sharp, giving Tess the impression of claws. The teacher was quite a plump woman, and her neck was so thick and short that it looked as if her large head came straight out of her shoulders. Her eyes were dark and very small in contrast with her broad, flattened nose. Tess couldn't help but think that if Mrs Brown's nose was painted black and shiny, she would make the perfect wombat for a play or school production. Mrs Brown's short, spiky brown hair only added to her wombat-likeness, as did her slightly furry looking brown woolen cardigan. Tess had to stifle a giggle as Mrs Brown squinted at the sunlight, increasing her resemblance to the nocturnal marsupial even more..."
Posted by Emma 1 comment: