A couple of weekends ago, while I was still house and dog sitting, my lovely parents came down to visit me. They did two main things during their stay; they bought me a new fridge for my flat, and Dad got a toothache. The first of these was far more worthwhile than the second.

For the past two years that I have lived in my little flat, I have been sharing my kitchen with a rather unreliable and grumpy old fridge/freezer. We dont know exactly how old this fridge is, but it is older than I am, at any rate. There were several problems with this old fridge. The door to the freezer was not so much a door, as something heavy that would occasionally fall on your foot without any notice. The crisper drawer was another something heavy that would occasionally fall on your foot without any notice. As was one of the door shelves. These were slightly annoying features, but not so much of a problem as the fact that not only was the fridge grumpy and prone to throwing heavy objects at your feet, but it was also lazy. It could not be bothered operating at more than one temperature, so in effect, it was either all a fridge or all a freezer. Either both the icecream in the freezer and the lettuce in the crisper got frozen or nothing did. I can tell you from experience that lettuce, celery, and watermelon should not be frozen. On the other hand, it is rather important that the frozen meat stay frozen.

As I will be staying in my flat for at least another year while I do honours, my parent's decided that it was time I had a more cooperative fridge. Uncle Kevin kindly donated some money for the cause (he has been very generous lately, having also bought two big, blue, very comfortable arm chairs for some friends of mine). So Mum, Dad, and I went out on an expedition to the shops on Saturday afternoon to look around at what we could get. Armed with a magnetized tape measure (that kept sticking to fridge doors) and the dimensions of the gap between the pantry and the wall where my new fridge would have to fit, we set out to find the most suitable candidate. We very quickly found exactly what we wanted, only to be told that we couldnt have it. More precisly, that we couldn't have it yet. We were hoping to take the fridge back to the flat and set it up that same afternoon, so we were not very impressed with the sales man for telling us that we couldn't have it. So we found a new sales man, who said exactly the same thing, but that we liked a lot better. We then had to keep hunting to find the same fridge in a different place, a place where they would let us have it today, not in ten days time. We did manage to find the same fridge in a different place, but also for a different price. After talking to another sales person who was better than the first, but not as good as the second, we got them to adjust the price. Then all we had to do was pick up the fridge and take it home.

That was easier said than done. It wasn't so much bringing in the new fridge that was the problem, but taking the old one out. By this time, it was pouring with rain and we all got rather wet planting my grumpy old fridge in the middle of Ayden's driveway so that he could put it in his garage and store beer in it (yuck!).

Well, anyway, that was weeks ago. Until a couple of days ago, I was still housesitting, so it is only quite recently that I have actually gotten to know my new fridge. The freezer stays frozen and the fridge, unfrozen. Its a rather perfect arrangement. Today I did the grocery shopping and I was so excited about being able to store stuff in the freezer, that I bought a rather insane amount of groceries. When I got the groceries home and started unpacking them I was begining to think that they all wouldn't fit in my new fridge (which is an LG, by the way - just in case you were wondering) as it is rather small due to the size of the gap that it had to fit in, but it is so much more usable space than my old fridge that everything actually fit in quite easily, with quite a reasonable amount of space left over.

Well, I bought quite a lot of souvenirs while we were in Europe. I deliberately limited myself, though, for several reasons: money, space in the suitcase, and I'm trying not to collect to much 'clutter' in my home. I tried to buy only things that I really wanted, things that would remind me of certain moments and places in our trip that I wanted to remember forever. Things like the wooden tulips from Amsterdam, the Celtic necklace from Loch Ness, the lace from the last lacemaking school in Venice, and the leather bracelet from Florence.

Recently, though, after considering the beauty of a small Murano glass fish I brought home from Venice, and the relevance of it to my study area (I am a Marine Biologist, after all) I have been wishing that I had bought more than one. Well, actually I did, but the other two were as a gift for Grandma Kerrison because they reminded me of the tiles she used to have in her kitchen in Branxholm. Well, actually, technically it was Rob who bought those.

Anyway...
After a prolonged session of kicking myself for not realising that I would want more, I decided to have a look around the internet to see how hard they are to find. Murano glass is very popular with collectors so there is a lot of it around the net, but you have to wade through pages of very expensive collectors items to find the cheap stuff that lines the walls of every souvenir shop in Venice (and there are a lot of souvenir shops in Venice).

I finally found a site with exactly what I wanted and they were even cheaper than they were when I was actually in Venice.

Until postage was added, that is.

Once I found out how much it would cost to get two tiny little, glass fish posted from Italy to Australia, I changed my mind (about 30 Euros from that site, when the fish themselves only cost a couple of Euros each).

Then I decided to have a look on Ebay and buy from a seller in Australia rather than get it posted directly from Venice. I was a bit sad about this as I wanted my souvenir from Venice to actually come from Venice, but I guess it still does - just with a few more pit stops on the way.

In the end, I found one at a reasonable price and bought it. Its not as pretty as the one I already have at home, and it cost me twice as much as the one I actually bought in Venice, but it is still fairly cheap and I still like it so I bought it anyway. Assuming it arrives safely in the post over the next few days, I will be happy.

I'm hoping that a few pieces of Murano glass will be enough to satisfy me for now because I really don't have the money or the shelf space to become like the hundreds (thousands?) of die hard Murano collectors out there. At least I have decided to limit myself to the small, inexpensive fish... Or to fish, anyway, I might get some bigger ones ...Or to marine themed figurines in general... the acual fish bowls they had were quite nice as well ... actually there were some really nice serving bowls as well... and the wine glasses were beautiful.... 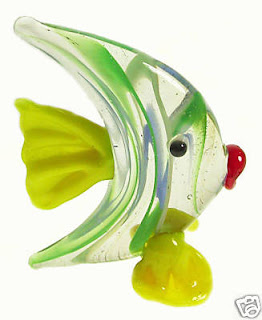 This is the one I just bought.
My other one is prettier.
Posted by Emma 2 comments:

The best thing about working so much the last couple of weeks is, of course, all the money. The worst thing is not having any spare time to go and spend that money :)

Good news is that I am only working 3 days this week. That's enough to be paid well while still allowing me to spend time doing other things. Especially as I really need to spend a day in at uni organising some stuff for honours.

I am still currently housesitting due to a combination of my Aunt and Uncle "missing" their boat and them being in swine flu quarantine once they get back in the state. So for the next week or so I am still living over the river, but they have stolen my puppy dog so its not as much fun as it was. I still have Austar, though, so it could be worse :)
Posted by Emma 1 comment:

I do try to keep the crazy side of me hidden as much as possible, but I'm sure that you all know that it is there. I'm fairly harmlessly crazy, not psychotic or anything, but I am still a little crazy. Usually this craziness is played out only in the privacy of my own mind. Rarely does any of it actually make it out into the real world, but whilst I am waiting in line at the supermarket or doing my house work, my mind is busy thinking up its latest bit of crazy.

The craziness that my mind dwells on at any time seems quite random and could be almost anything, but recently it has been dwelling on one thing over and over again: What would I do if I was told that I only had 18months left to live?

Most of us don't get told how long we have left to live. Life is short and death can come suddenly. We don't all get the opportunity to prepare for our deaths, we get too caught up in all the little things that we have to do everyday and we forget to look at the bigger picture. We forget to say simple things like "Thank-you" and "I love you." And we forget to mean them.

So, what would you do if you knew you only had 18 months left on earth?
Posted by Emma 5 comments:

When I was interviewed for the position at Bakers Delight I was told that I would be doing 3 afternoons a week. After a couple of days of training, though, I was suddenly rostered on for 5 afternoons a week. Apparently my manager is very happy with my progress learning the ins and outs of what my job entails and is happy to have me around as much as possible. This is really good for me because it means that I will get as many hours (and as much money) as possible before I start my honours in August. When they finally get around to actually paying me, that is.

Some of my shifts are only 3 or 4 hours long, but when you are on your feet the whole time it is still enought to tire you out a little. Thursdays and Fridays are huge days for me, though. We dont close until 9:00pm on Fridays which means I am on until 9:30 which means that I get to work a 9 hour shift. Big money!

Anyway, thats about all I have to say today.
Posted by Emma 4 comments: