I'm unreasonably looking forward to spending some time at Stanley, "the Port Wenn of Tasmania", next week with Mum. I've been wanting to spend some time playing tourist there since I visited it very briefly on a work trip  a year or so ago. I'm hoping for some gorgeous sunny weather, but given the weather we've had recently, overcast and showers is perhaps more likely. Either way, unless its completely stormy, I'm sure I'll have a great time.

Can't wait to find the best coffee in Stanley with you, Mum :)
Posted by Emma 1 comment:

I was out and about being cultured two nights in a row last week. Well going to opening night at the theatre and a fundraising Ball sounds cultured, doesn't it? It really isn't, but it was a lot of fun anyhow.

I organised a girl's night group to come with me to The Vicar of Dibley play, being put on by Encore Theatre at the Earl. Due to our various commitments, the night that worked best for all of us was opening night, and due to there being hardly any seats available where all four of us could sit together, we ended up in the very front row. So there we were, at the theatre, in the front row, on opening night. Thankfully, the Earl is one of those places that sitting in the front row is actually a good thing, not like some theatres where you really can't see anything from the front row.

The play was quite good, which I was very pleased about given that I was the only one from our little group that usually goes to the theatre and I had convinced the others to come with me. The local cast were really good, especially Alice, Owen, and Mr Horton - you could be forgiven for forgetting that you weren't watching the original actors. Unfortunately, Sue Hodge's performance as the Vicar was less than stellar. Overall, the play was quite good and kept us all entertained. The girls said that they wouldn't mind going to another one, so I may have converted them into theatre goers.

The next night was the local Hospital Ball, a fundraising event that I was attending as Mum's date. I like to think that I was a good date for the evening. The band, 24/7, did classic pub rock covers from the 70s to the 90s and were actually very good. We even danced to quite a few of the songs. And I got a balloon! Unfortunately, that balloon has now died, but it was fun while it lasted.
Posted by Emma No comments:

I have had a tough couple of weeks for a number of reasons, most of which I don't want to dwell on right now. I haven't responded very well and have been spontaneously snapping unsuspecting people's heads off or bursting into tears - sometimes I even do both at once. There is no excuse for taking everything out on other people, and I want to apologise for it.  Thank-you to everyone for putting up with me and supporting me through the last few weeks. One day, I'm really going to have to start acting like an adult and stop throwing tantrums, but I fear that there might be a few tantrums left to throw before that happens.

My beautiful, 100 year old great Grandad passed away last week. It was only a few weeks ago that the extended Kerrison clan gathered to celebrate Grandad's 100th birthday with him, and it was such a blessing that he was so well and able to enjoy every moment of his party. I'm so glad that most of the family was able to be there and join Grandad in celebrating reaching his goal of making it to his hundreth and getting his telegram from the Queen. 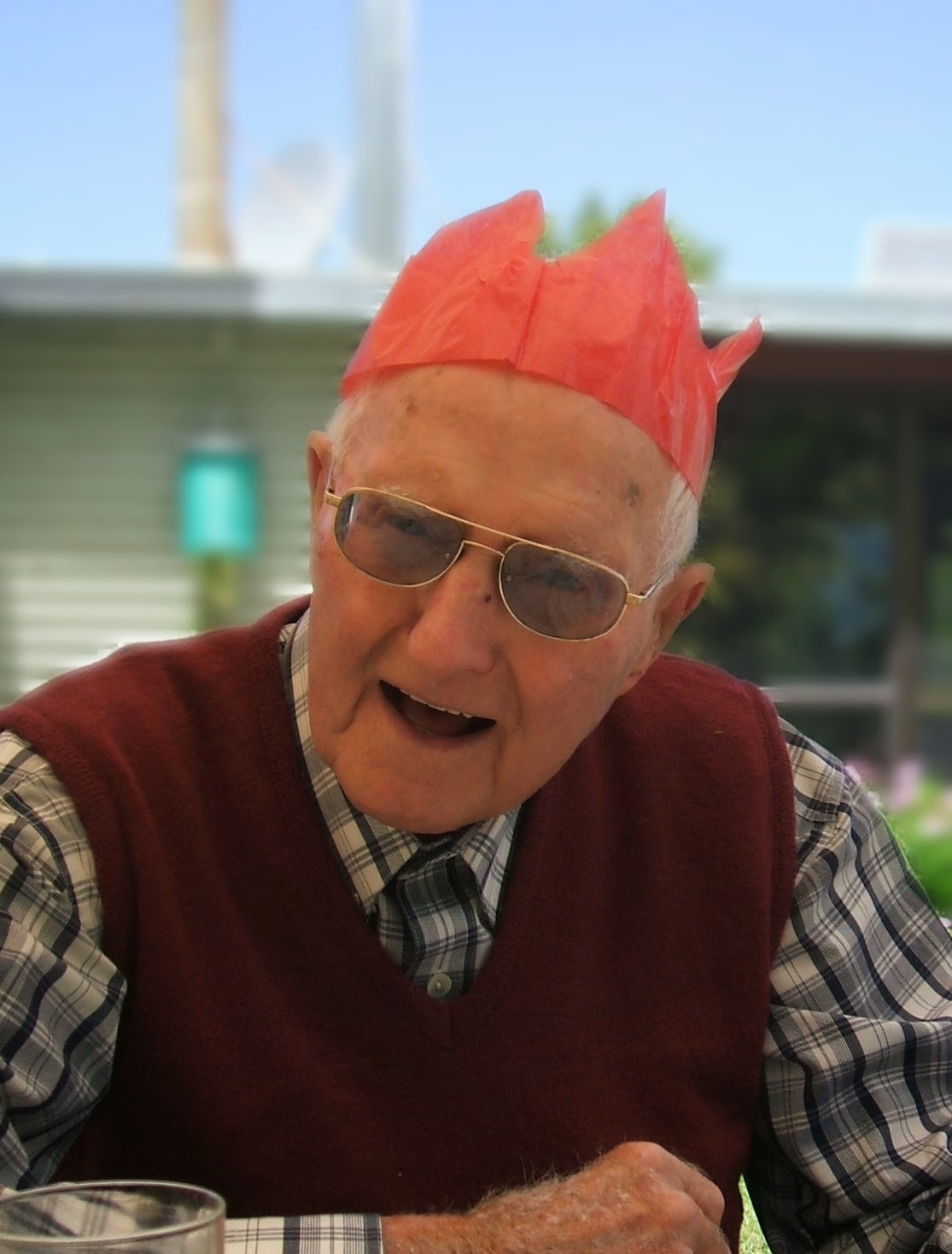 I took this photo at Christmas a couple of years ago and it is still my favourite of Grandad. He always loved a party and being surrounded by his family.

You might think that the fact that he was so very old would make it easier to say goodbye to him, and in a way I suppose that's true. When someone has lived to 100, you are very conscious that the time they have left with you is short and you are more prepared for their death. Or at least, you think you are. It seems to me that actually losing someone of Grandad's age is harder than expected. Its a hard concept to grasp that Grandad is no longer around. After 100 years of always being there, Grandad was a constant in all our lives. He was also our connection to 100 years of history and to the generations of my family that I never got to meet, and I suddenly feel disconnected from it all.

I am so blessed that I got to know Grandad so well. Not many people get to know their great grandparents and I got to keep Grandad until I was well into my adulthood. My favourite memories of Grandad will always be the ones from my childhood, though. I will always remember exploring Grandad's amazing garden with him, and I will never plant a seedling or pick a tomato without thinking about Grandad.
Posted by Emma 1 comment: