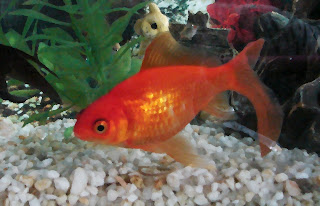 Today, my old friend Jeff died. Jeff and I had been together for 8 long years - my entire adult life (plus some), but now we are together no more.

Jeff was one of my first goldfish. I got him with 3 others when I got my first fish tank. Sadly, his three companions died from a fungal infection when I first moved to Hobart, but with medication and care, Jeff pulled through. Jeff also survived at least 4 seperate swim bladder problems, another fungal infection, a massive tumour (which he had for the past 3 years, but never seemed to bother him), and moving house 6 times. Jeff outlived many companions, and just kept on surviving.Until today.

Yesterday, one of his companions died, but there was no obvious signs of what had killed him. By this afternoon, the fungal infection had become obvious, but Jeff had already succumbed. I've treated my remaining two fish, but I'm unsure if they will pull through. While I enjoy all my fish, Jeff was the only one in the past few years that has had a name and was the one that I was attached to.

So, rest in peace little Jeff. Thanks for all your years of fishy friendship. You were a good fish and I will miss chatting with you every morning.
Posted by Emma 4 comments: 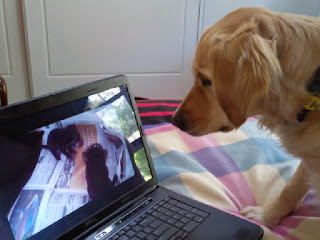 For Anya and our other fans... 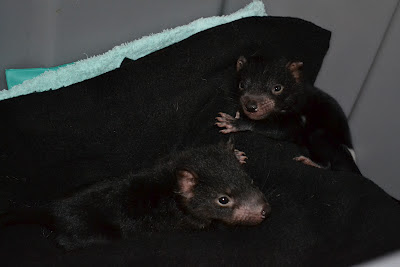 So here are my too little furry babies. The one in the front is Tayla and behind her is her brother, Ronan. Tayla is almost entirely black with only a chest marking, while Ronan has a very cute triangle on his rump and dots on both his shoulders as well as a chest blaze.

It took me a few days to finalise their names. I had quite a long list of possible names including Sparrow and Wren, Topher and Sierra, Severus and Lily, and quite a few others. The problem was that none of the names seemed to suit them. I'd toyed with the names Ronan and Tayla, but they didn't even make it onto my short list. Then the other day, while feeding them, I decided that I really needed to name them as soon as I could. I wanted to give them strong, positive names that they would grow into.
Their namesakes, Ronan and Tayla, are two characters from Stargate Atlantis (which Christine and I have been re-watching lately), they are both among a very small number of survivors after their peoples were decimated by a seemingly unstoppable enemy. Ronan and Tayla are both warriors, constantly surviving against all odds and fighting for the survival of their people. That's what my little babies are like, warriors surviving against the odds.

They are doing quite well, drinking much better, and can be quite active, play fighting and making as much of a mess of their enclosure (aka large plastic tub) as they can. I've been able to decrease their feed frequencies to every four hours rather than every three hours, which is nice. It still feels a bit like I only just finish feeding them and I have to start again, though. Especially at night. Even though I love looking after baby devils, I tend to have trouble remembering that at 3:00am. I'll try them on mince over the next few days, and if they eat it I'll be able to leave a bowl of mince in with them and decrease the night feed frequency. It'll be nice to be getting a more normal amount of sleep again. In the mean time, I'll try to get as many photos and videos of them doing cute things as I can.
Posted by Emma 2 comments:

As of today, I am hand raising 2 orphan baby devils. I have a male and a female, both weighing in at approximately 300g each - the girl is slightly larger than her brother. As yet I haven't named them. I'm still deciding on the best names. They are cutie pies and I'm sure that I'll be posting plenty of photos once we've had a chance to settle into the routine of 3-hourly feeds.
Posted by Emma No comments: