As we usually do about this time of year, my family decided to escape the Tasmanian winter for a week and holiday somewhere a little bit warmer. This time we explored the area around Forster Tuncurry on the NSW coast, based in a tiny town (mostly just holiday houses) called Elizabeth Beach on the edge of the Booti Booti National Park. This area of NSW is quite picturesque, having the ocean, forests, and lakes right next door to each other. Most of the things to do in the area are walks, scenic drives, and cruises. Our bungalow for the week was very comfortable and the weather wasn't too bad so we had quite a nice week away.

One of the things I particularly wanted to do during our week in the area, was to go to Sugarloaf Point Lighthouse at Seal Rocks, partly because I like lighthouses, but mostly because it seemed like a great place to watch the ocean and spot whales. 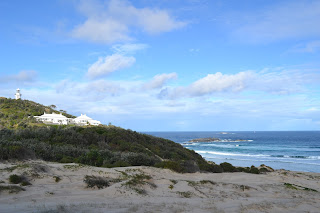 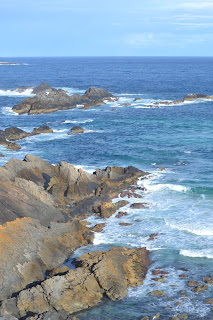 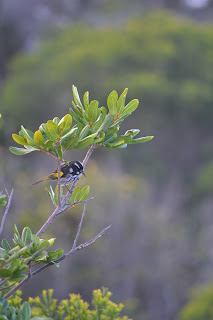 New Holland Honeyeater keeping us company at the Lighthouse 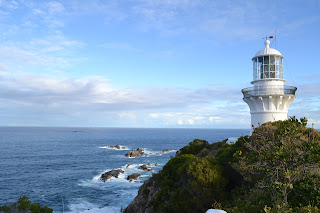 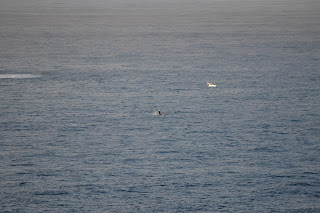 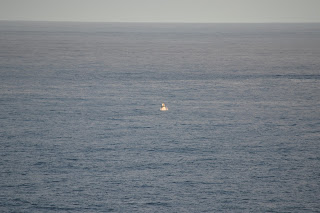 It took a while of watching an empty ocean to finally see the whale (about when I was ready to give up), but finally (when I had entirely the wrong lens on my camera and had to do a quick switch) Mum spotted the whale blowing. It was quite a long way off the coast, but it obliged us with a very active display of tail slapping, head lunging, pec slapping, and breaching so I was quite content. That was probably my favourite part of the entire holiday.

Here are a few scenery shots from some of our other explorations: 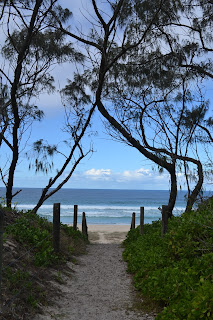 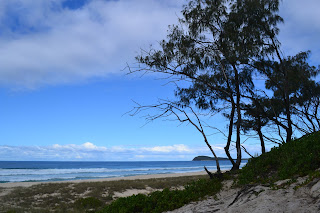 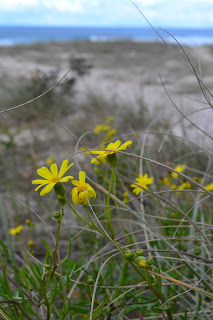 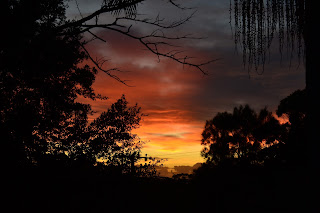 Sunrise at the resort (which I was only accidentally awake for)

Regular visitors to our balcony at the resort. They were accompanied by 2 magpies, 2 noisy miners, and a brush turkey. 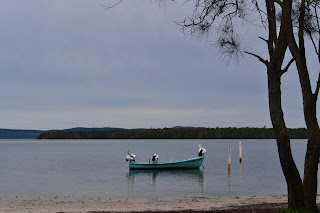 One of the lakes (can't remember which one)

By general agreement, we decided to take a relaxed cruise from Forster up Wallis lake. This takes you past a lot of commercial oyster farms, but there is also a lot of natural scenery to keep you occupied and plenty of birdlife. 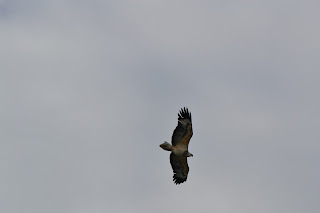 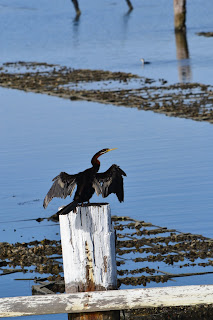 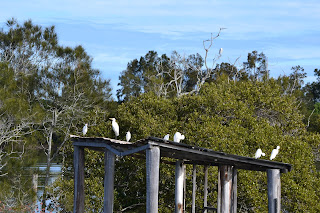 By far the most exciting bird watching was actually the pelicans, though. I've always liked pelicans, but there are hundreds of them in the area so you wouldn't expect me to get so excited about seeing some more on the lake. What I have never seen before, though, is a pelican breeding colony or a baby pelican. I've seen photos of baby pelicans before (which look a bit like a raw plucked chicken with a large beak), but I had never seen one in the flesh.The cruise took us past Pelican Island, a small sandbar island where the pelicans breed and we were lucky enough to spot a glimpse of a very young, very naked, ugly, baby pelican.
Unfortunately, for the 2 seconds the baby was visible before its parent hid it from view by settling over it to incubate it, I had entirely the wrong lens on my camera (always the way) so I only got this entirely underwhelming photo of it, but it is there. 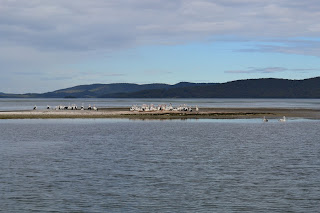 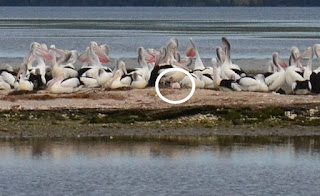 And this is atrocious quality because I've zoomed in so far, but that little blob of pink I've circled is the second best highlight of my week (after the whale spotting).

To finish off our cruise, just before we got back to the dock, we were joined by a pod of young dolphins. A day with dolphins in it can never be a bad day if you ask me. 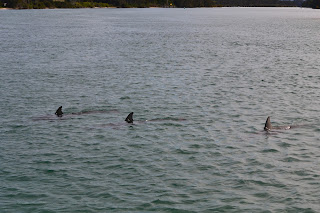 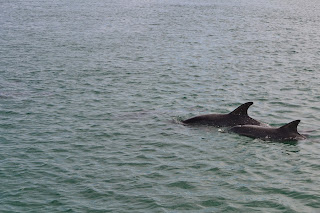 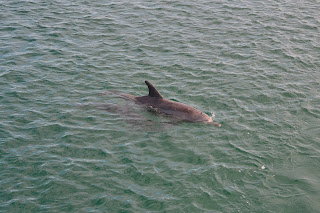 So, there you have it, my week in pictures. I had a very nice holiday, as did the rest of my family (I think) and now I'm back in the Tassie winter ready to try and sort out what I want to do about the unemployment situation.
Posted by Emma No comments:

So, unfortunately I am still unemployed. One of the worst things when you are unemployed is that everytime you meet new people, they enquire what you do for a living. Everytime you get asked the question you have to admit to yourself that you do nothing, and then you have to deal with the half-hearted "oh, I hope you find something soon" comments from the person who asked. Well, yesterday I decided that I needed to find a new way of answering the question. I will now put on my most pretentious accent and declare "I've decided to focus on my art" whenever the question is asked. Unfortunately, though, if there are any follow-up questions I'm stuck again because I haven't so much as picked up a paintbrush in months. I told my friend, Cath (who is also currently unemployed, or practising for retirement as she puts it) about my new strategy yesterday and she said that she thinks my terrariums qualify as art. So this is how my next encounter with an innocent enquirer will go:

Innocent Enquirer: "And what do you do, Emma?"
Me (in a very pretentious accent): "Oh, I'm focusing on my art right now." (superior, smug look)
I.E: "What kind of art do you do?"
Me: "I construct terrariums as way to view the world as individual microcosms of reality..." Followed by more art-babble until the poor enquirer surrenders.

Anyways, on to terrariums. You may remember that I made my brother a terrarium of a hobbit hole a few years back for his birthday. I have since had the pleasure of re-making it because he killed all the moss and got quite used to having it sitting on my kitchen table while it was recovering. I've always been quite interested in mosses and the terrarium craze is one that I can fully get behind. As I see it, there are three main problems with building terrariums:
1- Finding the right container can be really hard and very expensive
2- Sourcing mosses and plants can be difficult (although, not if you do it the way I do and simply gather small samples of interesting mosses while on walks)
3- Finding unsuspecting victims to give them to can be hard and you might end up covering every flat surface in your home with cute terrariums.

The first of these problems has always been the hardest to surmount in my opinion. You can get all kinds of different containers. Apothecary jars are commonly used, and you can buy glass domes specifically designed for terrariums. Personally, I think that all of these containers have massive design flaws and are actually quite useless to build any sort of reasonable terrarium in because they usually have lots of vertical space, but not enough horizontal space. They are also hideously expensive. So, when I stumbled on cookie jars that would make perfect terrarium containers for $2.50 each I bought 3.


And here are my 3 terrariums 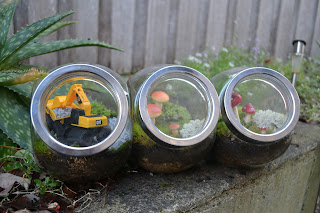 Firstly, there is one with 5 different types of moss and these cute little toadstools that I bought in a fabulous new shop called The Wooden Box. This one is for me and is sitting happily on my table. 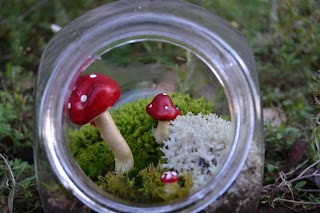 Secondly, there is a very similar one, but with different mushrooms for my friend Cath. We discovered months ago on one of our walks through the rainforest that we are both similarly obsessed with mosses and fungi. I gave Cath her terrarium last night and she absolutely loved it. I was clever enough to wait until she commented on how much she liked mine before I said "Funny you should say that" and bought out hers 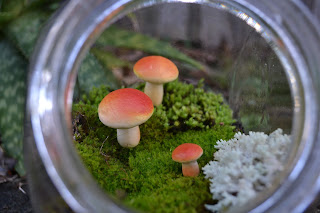 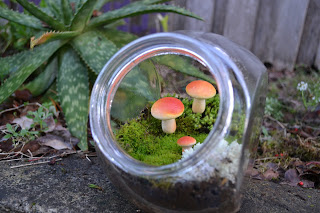 And Thirdly, there is quite a different one with only 2 types of moss and a quarry scene with CAT machinery for the Boyfriend. This one is more about the machinery than the moss, but I still like it anyway. 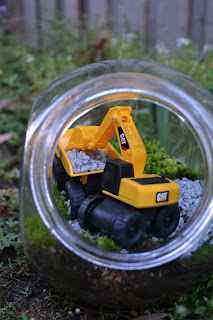 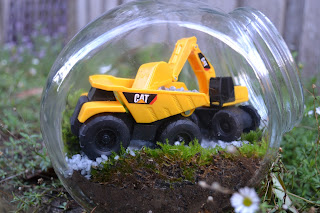 So, next time you see me going for a walk and coming back with surreptitiously gathered moss specimens, you'll know that I am just "focusing on my art" and everything is fine.