Well, for our crazy Christmas I first of all left Hobart on Tuesday and travelled up to my parent's house. My brother joined us there on Wednesday evening (Christmas eve) so that we would be able to have a fantastic (I'm using a sarcastic tone of voice) start to our holiday by getting up really early on Christmas morning.

Christmas morning we did the family opening presents and having breakfast thing and then packed up a huge mountain of things into Dad's big blue car and left a little after 8:00. By 12:00, after a little detour to go to my house and pick up something I forgot, we made it to Auntie Libby's for Christmas lunch. It was the usual - lots of family (although not as much as usual) and lots of food (although not as much as planned because we were all full before main course).

Later that afternoon we all piled back into the car with slightly less stuff and travelled on further down to Taranna (if you don't know where that is you can substitute Port Arthur and you will be close enough) to see the other side of the family.

On boxing day we repeated Christmas with the extended family on Dad's side - swapped presents and ate too much again.

We stayed at Grandma and Grandpa's in Taranna until Saturday when we travelled back up to Mum and Dad's with a couple of pit stops on the way to feed the fish at my house and to play Santa and deliver presents to Uncle Day from all of the family.

We stayed at Mum and Dad's on Saturday night and most of us stayed on Sunday night as well, but on Monday morning it was time to repacked my bag (again!) and get back on the road.

While we are here, Dad and Rob are planning on painting his roof if the weather holds, and Mum is in charge of cooking, but I don't seem to have a job so I think I will catch up on some sleep and plan some details of the trip (less than 3 weeks before we leave, now!) and try to figure out what I'm going to do and where I am going to live now that I have graduated.

Anyway, that's my crazy Christmas. Sorry I don't have any photos.

'Twas the day before Christmas and .... I met Charlie the Christmas Beetle. 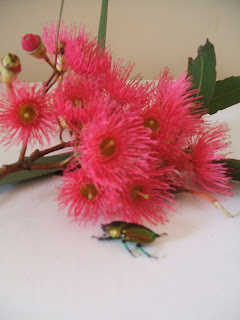 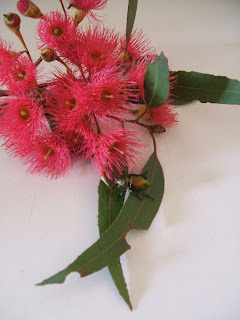 My camera isn't very good at up close and personal so the photos didn't turn out fantastically, but you get the idea - he is a large, shiny, greenish, redish beetle.

He is so handsome that I decided to make a habitat for him and keep him for a little while, but he didn't want to let go of my finger when I tried to put him down. He is now happily residing in his little habitat and I will release tomorrow morning when we leave.

I know you think I'm strange for befriending a beetle, but I had to find something to do. I am a zoologist, you know.
Posted by Emma No comments: 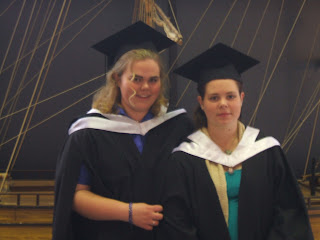 Well, after my success growing sunflowers last summer I decided to give a repeat performance. A couple of days ago the seedlings finally broke through the soil and became visible. Naturally, I got very excited about this and the next morning rushed outside again to see how much bigger they had grown, and, to my absolute disgust, they had all been attacked by something or some-one and the leaves (an extremely vital part of a seedling) were missing- presumably bitten off.

Being the amazing ecological detective that I am, I was able to discern that the leaves were removed in such a way that I could narrow it down to either teeth biting them off, or sharp finger nails pinching them off. Of course, I didn't want to think that some-one would have deliberately sabotaged my sunflowers so I assumed that a herbivorous animal had done the damage, and since I have never seen a wallaby in the area I decided the most likely culprit was one of the neighbour's rabbits which occasionally find their way out of their cages. So I was just about to declare the loss of my baby sunflowers as a natural disaster when a thought occurred to me- My neighbour, Pat, who has a garden adjoining mine had sunflower seedlings the same age as mine. I quickly went back outside to see if she had any remaining seedlings and saw, to my surprise, that all of her seedlings were unharmed- every single, last one of them (and she had lots because she just made a little trench and poured in seeds so they are all far too crowded and will need to be thinned out before they get much bigger).

Now this made me suspicious. If one of the rabbits did get out, why would it hop past the 100 sunflower seedlings in Pat's part of the garden which were directly on its path into my garden and then eat all 12 of mine?

So now the evidence is pointing to a human culprit.

And another mystery. Who is the woman I saw pulling weeds out of the lawn the other day from my kitchen window? And why has Peter's (who lives in number 1) car not been here since I came back from Launceston last week? And why does the new car park in a different position to Peter's old car?

Could it be that I have a new neighbour in number 1? And could she be responsible for the sunflower carnage?

Or was it Pat, a jealous fellow gardener? I don't want to believe that because I gave her some seeds from last years sunflower's so that she could grow hers.

And where is Peter from number 1? Could he have moved out due to the reoccurring, guilty nightmares he had after savagely attacking my sunflowers?

Will I ever find out what happened to my poor, innocent babies?
Posted by Emma 3 comments:

Remember how I won a trip to Europe. Well, Rob and I have been planning it in more detail recently so I thought I should update you.

We leave on the morning of January the 18th and after 22 hours of flying arrive in London. The following day we leave on the Contiki tour of Europe that I won which goes here:

Once we arrive back in London after having a whirlwind adventure around Europe, we are going to do some exploring of the UK and hopefully go up as far as Edinburg, Scotland and then come back down the other side of the island. I'm not sure yet if we will manage to get into Wales or not (but I want to).

With Wales (not including Australia) we will have travelled through 10 countries in approximately 3 weeks. Oh wait, I forgot the stop-over in Singapore so it will be 11 countries.

Its a pretty exciting concept, and it is finally starting to sink in a little (but not much).

I am looking forward to going to England, Scotland, and Italy especially, but everything will be ammazing. I'm still heart broken that we are not going to manage to go to Ireland, but I still plan to make it there sometime.

Maybe next time I win a free trip to a faraway place it will be to Ireland :)
Posted by Emma 3 comments: