Christmas may have been several weeks ago now, but better late than never. I've had a request to post some photos of the most popular member of my family enjoying his Christmas adventures.

I had a very good Christmas. Good company, good presents, and good food. On Christmas Day, we went down to Hobart to my Aunty Libby's for a big family Christmas lunch and then on to one of my favourite places in the world for a few days camping. The drive was made much more interesting than normal because Darcy accompanied us. Previously, the furthest Darcy had travelled was the one hour trip to Devonport so this was a very big trip for him. The drive exhausted him completely, but Darcy settled in to the camping life reasonably well. He was a bit overwhelmed by it at times, but he happily zoomed around in the tent when the great outdoors was a bit scary. 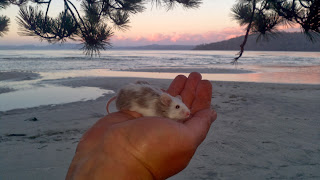 When the tide was out and it wasn't too windy, I let Darcy loose (well, not really loose, but in his ball) on the hard sand for a bit of a run. He was more interested in sniffing and tasting the seaweed and other detritus than in running, but he seemed to enjoy it. 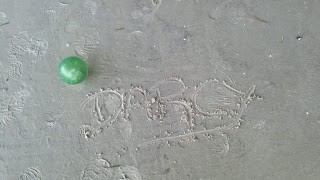 He come through his camping adventures unscathed and is a much more accomplished traveller now. On the way home, rather than his usual refusal to sit still while in his travelling box, he made the wise decision to sleep the whole way home.

Darcy has since been spoilt rotten because I spent a good part of the weeks following Christmas at home on sick leave.

Right now Darcy's palace needs cleaning so I'd better attend to that before he throws one of his tantrums and throws his food and bedding all over the place.
Posted by Emma No comments: