Two posts tonight because the first one got a bit too full of thesis related nonsense to fit in a bit more general update of how everything is going.

My life is currently full of many little ups and downs as it always is, but the pressure of the upcoming very important deadline turns these into a rather dramatic emotional rollercoaster. Speaking of which, in case you haven't noticed, look to the right of the screen - thats the deadline. If you look a bit further down the right of the screen you will also see another new gadget I found on the weekend. For some reason, when you are looking for a countdown gadget for your blog its much easier to find a fish tank gadget. I liked it, so it stayed.

One of the "little" downs that I had this week was finding out that my supervisor had (again) left the state without warning. This time he is at a conference in Paris and won't be back until the end of next week. Have another look at the deadline on the right of the screen. That's a big chunk of the remaining time without a supervisor. I had a bit of a meltdown last night. After taking some time today to calmly evaluate whether or not I could get enough done without him to survive, I have decided that its going to be ok (but only just).

To cheer myself up after my meltdown last night I had some fun giving Bernard (my laptop) a bit of a makeover. To cheer myself up tonight after yesterday's meltdown, I blogged :) (twice, even). Check out the photos of Bernard (I'm wondering if maybe I should have called him Penny after all? Oh well, Bernard likes flowers - remember his summer girlfriend). 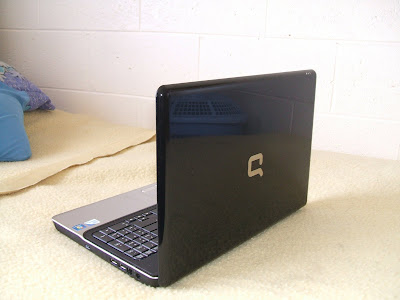 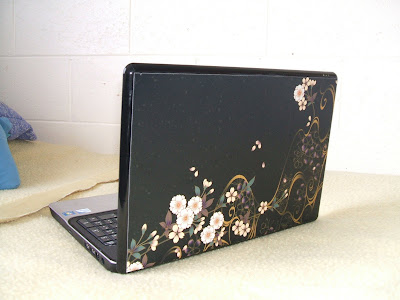 After :)
P.S. Don't forget there is a second post tonight - read that one too.
Posted by Emma

"Courtship calls. I'm going to get Alice some chocolates and flowers and chocolate flowers and florets of chocolate. I'm sending a truckload of woo."

Bernard is cool! Love the flowers!

I think he's very sensitive and totally in touch with his feminine side.